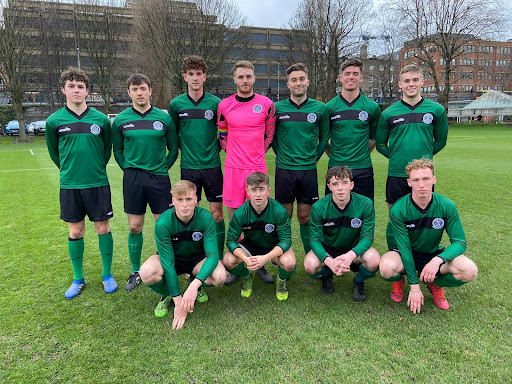 Dublin University Athletic Football Club (DUAFC) began their Collingwood Cup campaign on Wednesday afternoon with a first-round victory over the University of Limerick (UL), a result which secured them a place the quarter final of the competition. Played in perfect conditions in College Park, the opening exchanges were lively and entertaining with nothing between the teams in the opening quarter. Both sides traded a series of half chances during this time, but the clearest opportunity came on 22 minutes. A speculative UL shot from just inside the box was blocked but the ricocheting rebound fell in the path of another attacker lingering near the penalty spot. Pulling on the shot first time, he made solid contact with the ball but Trinity goalkeeper Daniel Grace was quick enough to parry the ball over the bar for a corner.

But Trinity soon broke the deadlock. An attack developed down the left wing and a low ball was swung into the box. Though it missed the intended attacker, it fell instead around the penalty spot to winger Jem Campion. Taking the sting out of the ball with a deft touch and then digging it out from under his feet, he picked his spot and let fly. Though not hit with tremendous power, the shot was sufficiently accurate to beat the goalkeeper’s sprawling arms and it nestled into the bottom corner, prompting loud cheers from the two hundred or so spectators in attendance.

But Trinity were not finished yet. Buoyed by their goal, they continued to pile on the pressure, keen to tighten their grip on proceedings. A free from 40 metres in the centre of the field was delivered into the box, hanging invitingly in the air. The UL goalkeeper came off his line to punch the ball clear but a Trinity attacker rose highest among the sea of bodies. His headed effort seemed to be on course for the empty goal, which had been vacated by the UL goalkeeper, but it bounced just to the right and wide. Trinity had one more chance on the cusp of half time. A shot came in from the edge of the box but the goalkeeper got down low enough to palm the ball beyond the post, but only barely. The half-time whistle was sounded shortly after, Trinity the happier of the two sides and deservingly ahead.

UL came out the stronger team in the second half, enjoying the lion’s share of possession and making regular incursions into the Trinity defence. Trinity absorbed this pressure effectively and despite conceding most of the ball and having to sit back, they never coughed up any significant goal chances. And they continued to pose a threat on the counterattack whenever such chances arose. UL almost scored a spectacular half-volley attempt from outside the box just before the hour mark but it was slightly too high. Their next significant chance came in the 83rd minute. A cross fell to an attacker near the Trinity penalty spot. Adjusting his feet, he fired a shot towards goal but goalkeeper Grace was alert to the threat and pushed the effort away. Moments later, a UL attacker weaved his way through the thickets of the Trinity defence and all the way to the six yard box, delivering a low and powerful shot toward goal. But Grace was once again equal to the task, smothering the ball and averting the danger.

With five minutes of injury time to play, UL proceeded to lay siege to the Trinity goal, bombarding them with high balls and whipping crosses in from all directions. But the Trinity defence held firm. In fact, they almost doubled their lead in the dying embers of the game. Embarking on a counter-attack and with UL having committed most of their team forward, a quick cross was caught first-time on the volley by Patrick Johnson but it tailed left and wide. The referee called a halt to proceedings moments later and so it finished in College Park, 1-0 to Trinity.

For Trinity, goalkeeper Daniel Grace delivered a commanding performance, something which became increasingly apparent in the final quarter of the game when UL repeatedly bombarded the Trinity rearguard. He was reliable on set pieces, rising highest to claim high balls while equally proficient in getting down low to save dangerous shots. Outfield, Cian McAllister was Trinity’s best player. He was a livewire in midfield, covering every inch of grass, tackling ferociously and dispossessing his opponent on numerous occasions. His distribution of the ball was excellent too.

Trinity will play Maynooth University in Maynooth at 2pm on February 16th in the quarter-final.