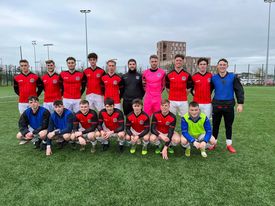 Storm Dudley made landfall in Ireland on Wednesday afternoon and its presence was to be the defining factor of Trinity’s Collingwood Cup quarter-final tie against Maynooth. As the Trinity side were all too aware, such weather-impinged games rarely allow for expansive attacking play or individual moments of brilliance: rather, the winning and losing of such games often comes from the opponent’s mistakes. And sure enough, all five goals in the game came from mistakes, either from set pieces conceded or from defensive errors in open play which led to goals.

The power of the wind deserves some description. It was a crossfield breeze, meaning it favoured no team and hindered both. Such was its power, coupled with the surface on which the game was played, that when the ball was placed down for a set piece, it rolled away, meaning the kicker had to re-adjust the ball on several occasions, hoping it would remain fixed to the ground. Sometimes another player was needed to keep the ball in place, American football field-goal style. Such conditions posed a great challenge to the first touch of the players, with the ball being zipped at them with the additional force of a 50km/h wind. There were throw-ins aplenty, too, but only on the side the wind was blowing towards.

Naturally, both teams spent the opening minutes becoming accustomed to the weather conditions, with neither side exerting control of proceedings initially. The first significant chance came on nine minutes and it fell to a Maynooth attacker. Receiving a perfectly weighted ball in the box and with his back to goal, he controlled the ball delicately on his chest and brought it to his feet. He struggled to dig it out from his feet however, allowing time for Trinity goalkeeper Daniel Grace, who had come out to assist his defenders, to return to his goal, while the Trinity rearguard managed to dispossess the attacker and clear their lines.

Maynooth gradually started to assert their control on the game then, enjoying the vast majority of possession and keeping Trinity pinned in their own half. When Trinity did get forward and their attacking moves invariably broke down, they always seemed vulnerable on the counter-attack.

And this pressure eventually broke the deadlock. With 24 minutes on the clock, a Maynooth attacker retrieved the ball near the corner of the Trinity penalty box from a broken down attack. An outstretched Trinity leg brought him to the ground and though there was limited contact, it was undoubtedly a penalty. Up stepped the Maynooth attacker and delivering a low effort to the left corner, he sent goalkeeper Grace the wrong way.

Trinity regrouped immediately after. Picking up a misplaced Maynooth pass, midfielder Cian McAllister fired from just outside the box but the shot lacked conviction and it trailed along the ground and into the gratefully awaiting arms of the goalkeeper. Trinity then won a free-kick on the edge of the box but it was blazed over the bar, an opportunity to even test the Maynooth goalkeeper gone abegging.

But Trinity’s chances of a comeback took a hit with four minutes remaining in the half. A corner was whipped into the box into the direction of the wind. The wind held the ball up in the air and it began to fall at the near post. It fell to a Maynooth attacker, who controlled the ball and fired from close range. A Trinity defender succeeded in sliding in to block the ball but the slide tackle was so close to the attacker’s boot that the shot was almost completely stifled and so the rebound did not go very far. Unfortunately for Trinity however, it went to the same attacker, who was gifted another shot from the same position, mere inches from the goal. And with the Trinity defender on the ground having slid in to make the block, the attacker made no mistake this time around, squeezing the ball inside the near post. Trinity now had a mountain to climb.

But like their response to the first goal, Trinity responded impressively. They then had their best chance of the game. A crossfield ball was delivered with precision onto the path of Jay Walsh, who was sprinting into the box. Without breaking stride, he controlled the ball with a deft touch and advanced forward. With just the goalkeeper to beat, but at a slightly acute angle to the goal, he side-footed the ball, aiming for the far post. But it tailed marginally to the right and wide. Half-time was called soon after.

Trinity could not have dreamed for a better start to the second half. Maynooth were building from the back after a Trinity attack had broken down. A misplaced pass fell to Trinity’s Jay Walsh. Maynooth must have anticipated the ball going forward for they had no one back bar one defender, meaning it was a two-on-two, one defender and the goalkeeper against Walsh and winger Jem Campion. Walsh passed to Campion who fired from some 12 metres, beating the goalkeeper and netting for the second game in succession.

But Trinity were soon set to double their fortunes. Just two minutes later, McAllister made a surging run down the right wing, having picked up a Maynooth pass that had gone astray. He squared the ball to Walsh in the middle of the box, who, taking a touch, steadied himself, picked his spot and blasted the ball beyond the goalkeeper’s near post. Trinity rejoiced in jubilation. They were back in the game and it had taken them just five minutes.

Trinity were buoyed by their two goals but this momentum didn’t last long as the home side soon restored their supremacy, assuming control of possession and threatening the Trinity goal on several occasions. Trinity absorbed this pressure as well as they could but their defence was looking increasingly porous.

And in the 64th minute this pressure paid off. Maynooth played a speculative through ball out of defence into the middle of the Trinity half. It was anyone’s ball and a race ensued between an onrushing Maynooth midfielder and the Trinity centre-half. The midfielder was quicker, however and in desperation, the Trinity defender attempted to slide-tackle the attacker. He missed the ball and the midfielder was through on goal. Advancing into the box and with just the goalkeeper to beat, he routinely dispatched the ball into the bottom corner.

Trinity were dispirited but they pressed forward, seeking an equaliser. Chances were scarce but they had one significant one with six minutes remaining, a headed effort from winger James Kelly. But the header lacked the power necessary to beat the Maynooth goalkeeper. A halt was called to proceedings shortly after and with it ended Trinity’s short but promising Collingwood Cup campaign.