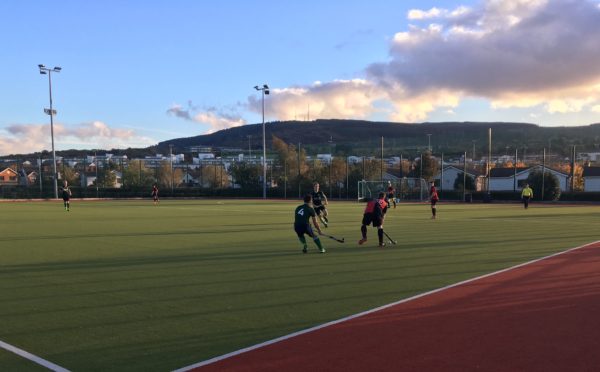 Dublin University Hockey Club (DUHC) opened its season against Rathgar on a mild, sunny, autumnal afternoon at the High School in Dublin 6.

The fixture placed Trinity against a side that finished one spot above the team in last year’s league. Rathgar’s team consisted of three Trinity alumni, adding an intensity which would build over the course of the game.

DUHC head coach Ash Harrison said before the game that “there’s a lot of new players this year” and that this game would give the team “a good idea of where they’re going”. However, the presence of new players did not result in a lack of cohesion in Trinity’s structure.

Rathgar won the toss, but Trinity pressed very effectively. This pressure eventually bore fruit in the form of a penalty corner, which was hit wide – an early opportunity for Trinity, missed.

In the first quarter, Trinity managed to find open field effectively, and the team’s attack was backed up by an impenetrable defence. This solid style of play later resulted in a snapshot by vice-captain Evan Rankin, which was saved.

Rathgar eventually grew into the game, showing its experience and bringing an element of physicality to the game. Thereafter, Trinity struggled to get the ball into the circle, resulting in speculative passes which induced groans from coach Harrison.

The first quarter ended scoreless. At the beginning of the second quarter, coach Harrison said that both teams were “expecting the same from each other”.

Just as Harrison was being asked what he was happy with in his team’s play, Trinity gave away a penalty corner from which Rathgar duly scored.

In response, coach Harrison could only say that he “wasn’t happy with that”.
Rathgar was dominant for the beginning of the second quarter, making regular positional gains when attacking down Trinity’s left.

However, it was Trinity that scored next, levelling in the second quarter through John O’Hara. A ball sent in by Ben Hickmott ricocheted around the Rathgar circle, which eventually found O’Hara’s stick and then the back of the goal.

Trinity, however, then went on to concede another goal themselves, gifting Rathgar the ball in its own circle following a wayward baseline pass.

Trinity’s efforts to equalise did not materialise for the remainder of the second quarter. The team found it difficult to penetrate the circle and was over reliant on the baseline when moving forward.

At half-time, coach Harrison opted to play with a back three and one sweeper. He said that Trinity “had much better of the play” but had been guilty of too much hesitancy, adding that the side needed to play with more initiative and speed.

The third quarter would prove to be very frustrating from a Trinity perspective. This was exemplified best when, upon being substituted, Roland Schneider almost smacked a bin with his stick out of frustration.

Trinity won two penalty corners back-to-back, but the team did not score from either. The first, rather lackadaisical; the second, a shot from Hickmott, was well saved by Rathgar’s keeper.

Shortly after, Trinity conceded a penalty corner. Rathgar’s shot was well saved by Sebastian Regitz, but a mix up at the back allowed the ball to trickle into the Trinity goal. 3-1 down, the dampening mood was now reflected in a heavy shower which fell at the end of the third quarter.

Captain Daniel O’Donovan gave a calm but encouraging team talk at the break. Here he stressed all the things Trinity needed to do to get back into the game. Chief among them was the need to show initiative and to get the ball into dangerous areas.

Trinity came out ready to put the third quarter behind it, moving the ball around effectively. This forced Rathgar into rash challenges, one of which resulted in a green card for Rathgar.

Although down to 10 men, Rathgar managed to keep Trinity out. However, once the offending Rathgar player returned, Trinity scored. Max Guilfoyle was the scorer, finishing off a pass from debutant Sam Hickmott – the latter being Harrison’s Player of the Match.

Guilfoyle’s goal set up a tense ending to the game. Rathgar continued to defend rashly. One challenge in particular sparked a physical reaction from Trinity, causing one of the umpires to step in.

Looking to increase the urgency of his side, Harrison swapped his goalkeeper out for an outfield player.

Moments later, this proved to pay dividends. Following Schneider’s cross into the box from the right, Liam Bean scored a brilliant reverse shot to level the score in the dying moments of the game.

Vice-captain Rankin said after the game that he had never seen Bean score a reverse before, but he added that he always knew that Bean had it in his locker. Huge celebrations ensued from the players and Trinity’s travelling fans.

A last attack was ultimately not allowed to transpire as the umpire blew the final whistle.

Afterwards, Harrison stressed the importance of the away draw, saying that they would be ready for Rathgar in the home fixture.

Rankin also emphasised the importance of the away draw, stating that the influx of increased competition down from the all-Ireland league meant that every positive result was a welcome one.