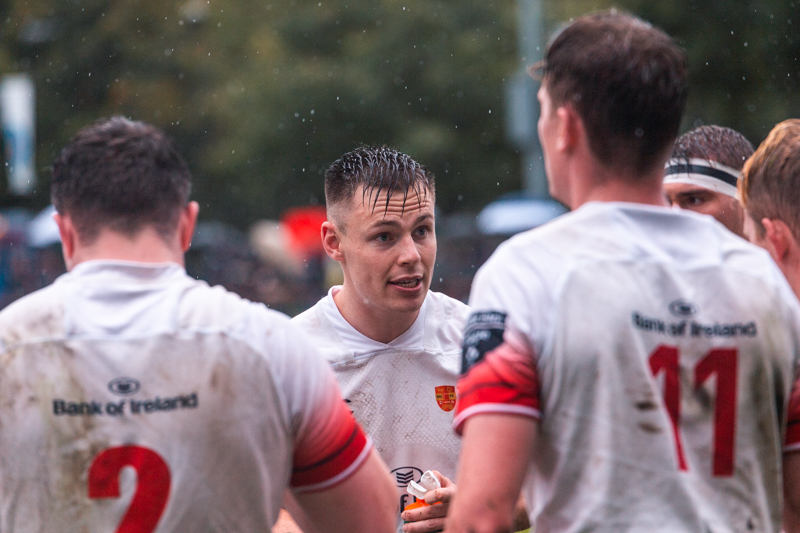 Dublin University Football Club (DUFC) played an exciting away encounter against Lansdowne under the backdrop of the Aviva Stadium, fighting to a 17-27 win.

Lansdowne, although winless, posed a tough opponent for DUFC. Whilst conditions for the game were clear by kick-off, the rain earlier in the day was a welcome occurrence for the players’ knees on the 4g pitch.

DUFC began the game by kicking off but would soon have possession of the ball again. With this, they worked the ball down the left, with Louis O’Reilly and Aran Egan directing traffic effectively. Eventually DUFC won a penalty five metres out before Egan took the three points.

Colm Hogan made a great line break in the next possession. His heavily strapped ankle evidently not posing a problem, but his pace on the other hand posed a significant problem for the defence. Lansdowne, hurrying to realign, gave away another penalty at the ruck and Egan made it 6-0 to DUFC.

Lansdowne won a penalty against the head soon after. DUFC would experience prevailing issues throughout the contest at scrum time. Lansdowne went quickly and after a series of forward carries scored – Tadgh McElroy from a pick and go close to the line. Peter Hastie was successful with the conversion, making it 7-6 Lansdowne.

Some sloppy offloading by Lansdowne following the restart gifted DUFC back the ball. Trinity, making gainline breaking one up carries, pushed into the Lansdowne half. On Paddy McCarthy’s turn to carry, he freed his hands to offload. This left Max Dunne with open field in front of him. Dunne galloped in from twenty metres out, scoring the first of his brace. Egan converted, putting Trinity back in front.

A few minutes later Lansdowne found themselves in Trinity’s twenty-two with a lineout in a prime mauling position. Through some dark-arts, Trinity managed to halt the maul and force a turnover. One such dark art included a Trinity player holding on to Lansdowne’s Temi Lasisi, in a fashion similar to the way that Farrell held onto Stander in Ireland’s game against England in the Six Nations back in 2020.

Lasisi responded, like Stander, in a confrontational manner. Yet whilst Stander wasn’t penalised, Lasisi was, with a yellow card. Controversially, the call was made by the linesman on the far side of the pitch, not the linesman two metres away from the incident.

Although up a man, Trinity would fail to capitalise on this advantage. Indiscipline at the ruck gifted Lansdowne three points. On Lasisi’s return, Trinity found themselves three points worse off and in their own 22. Trinity would hold them out, showing great knowledge of the rules to hold Murphy up over the line, earning a goal-line dropout in the process.

From the dropout, DUFC then conceded a well-worked Lansdowne try. Following a catch and hard carry by Lawlor, Lansdowne worked the ball left. They then interwove the ball through the oncoming defence, executing a two-on-one to put Walsh in under the posts. Hastie’s conversion drew an end to the first half with the score at 17-13 to Lansdowne.

The second half began with a brawl on the halfway line. A Trinity box kick was fielded by Michael Silvester, who then took it into contact. DUFC lock Harry Sheridan would meet him and drag him into touch, whilst holding him around neck. Southsider cries of “what are you doing linesman” and outrage in general ensued. The result: merely a lineout throw-in to Trinity.

The ‘missed high tackle’ scales would be balanced later. This time it was Ruadhan Byron who was the recipient of a high and unpunished hit. No further high tackles would occur for the remainder of the game.

Fan annoyance with the referee would persist, however, due to the number of stoppages – a constant theme throughout the game. It was no doubt a result of the highly physical nature of the match, but it did remove some of the fluidity seen in early passages out of the game,

The introduction of Thomas Clarkson, returning from Emerging Ireland duty, briefly shored-up the scrum enough to win a penalty. This faltered soon after. The number of penalties conceded at scrum time is something that DUFC head coach Tony Smeeth and co. will be undoubtedly looking to work on.

Dunne scored his second try after a series of forward pick and goes near to the Lansdowne line. Tackling ferociously and carrying with intent, Dunne was certainly one of – if not the singularly – best Trinity players of the game. Leinster’s Alex Soroka, who was spectating, also commended Dunne for his two tries. Soroka praised the team’s effort as a whole as well. Ruadhan Byron was also a standout player. A behind-the-back offload got oohs and aahs from the crowd, along with an incredibly D4-accented cry of “that pass was outrageous”.

A Clarkson try would put the game to bed. This came on the back of a series of good forward carries – a common theme throughout. Trinity’s defensive intensity would keep Lansdowne out for the rest of the game.

A line-out steal, turnovers at ruck time and a double tackle by Dillon, followed by a cheeky shove in the back on the tackled Silvester, all evidence of a concerted effort and drive to keep Lansdowne out. A last-minute dive in the corner by Liam McMahon for a bonus point would be to no avail. The linesman ruled him out of bounds, which brought the game to a close with Trinity winning 17-27.

DUFC remain unbeaten, a record only currently being matched this season by last year’s finalists Clontarf and Terenure. Lansdowne remain winless – a shocking run of form for a team that finished third last year. Trinity will host fourth place Ballynahinch in two weeks’ time, no doubt hoping to continue the impressive winning streak.