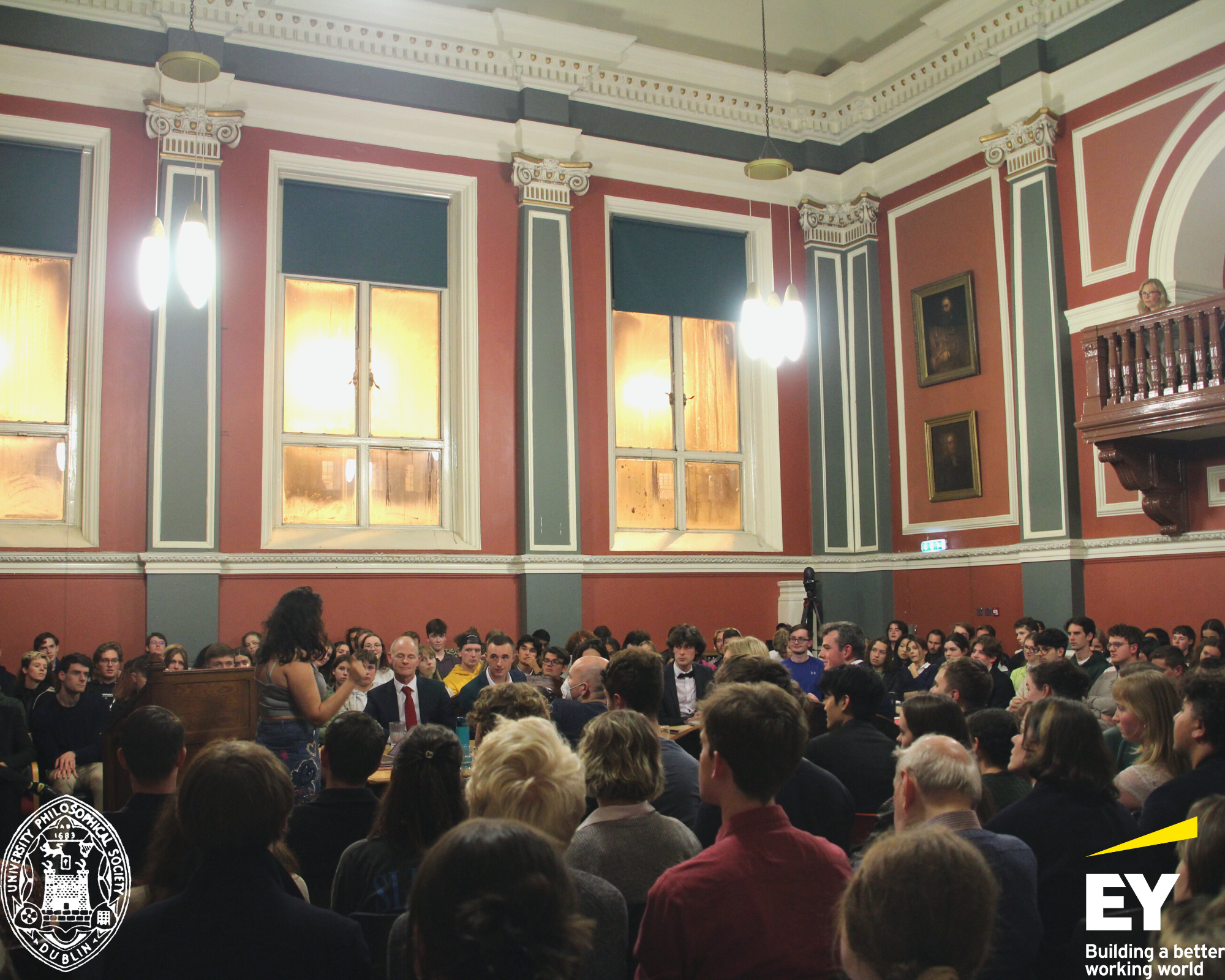 Students and politicians alike crowded into the Graduates Memorial Building (GMB) on Thursday evening to watch the Dublin University Philosophical Society (the Phil) grapple with the motion: “this house has no confidence in the Irish government.”

This motion came shortly after the release of the controversial Budget 2023, which sparked conversations about the exact role the Irish government should play amid frequent concerns regarding the increasing cost of living, the housing crisis and climate change. Debaters and attendees alike seemed to be keyed into these issues, holding a much more intense presence than the usual laid-back atmosphere of recent Phil debates. Following over an hour and a half of debates, the house ultimately voted in favour of the motion.

Although the night began with Registrar Ámhra Carey jokingly trying to defuse tensions by having everyone in the GMB hug those standing next to them, the debate quickly ramped up in energy as Murphy, a TD for People Before Profit, kicked off his argument by criticising those in power for being too conciliatory towards corporations, while failing to address systemic issues with the annual budget, insisting that the “government is hardwired to fail because of its ideological approach”.

Speaking second, Minister Smyth of the Green Party began on a lighter note, recalling the last time he had debated in the GMB thirty years ago, which was when he had argued in favour of the motion he now opposed in the debate. He then delved into his central argument that the government had improved in the past decades, citing widespread acknowledgement of climate change, improved drug policy and the “green wave of 2019”. He also highlighted that the “philosophy in the Green Party is to be ‘panromantic’” through collective and collaborative action.

Conway-Walsh, a Sinn Féin TD, spoke in favour of the motion, focusing her argument on the government’s lack of assistance with problems afflicting students, rural Ireland and those seeking healthcare, insisting that “if we keep voting for the same thing, we will get the same thing; we need a change”.

From the opposition bench, O’Brien argued in favour of what he described as more realistic politics, stating that there is “no magic wand” that would summon “these funds out of thin air”. O’Brien defended the government on the grounds that it was operating amid several crises, some of which were inherited from previous governments and that “any government … will be facing the same issues”. As such, he turned his argument towards a call for stability: “you don’t replace the words of soldiers in the middle of battle.”

Arriving at the lectern against the background of applause from the audience, Trinity student Gilroy focused his proposition speech on the idea that “a large part of [people’s] discontent is this government’s blatant ineptitude”. As someone working in emergency housing, he explained that “every day … I see the consequences of a failed housing policy”. He recalled “a family of eight living in one room with four bunk beds”, before challenging the opposition by asking, “how can we brag about that”?

Debating as an opposition speaker, MacNeill, a TD for Fine Gael, began by challenging the definition of the motion’s meaning of “confidence”, ultimately claiming that it was the role of government to inspire confidence by being “here to serve people, to represent people with honesty”. Throughout her speech, she reaffirmed the power of the public to use its freedom of expression and democratic power to influence the government and laid out the economic and social gains the government had made in the past decades.

In an impassioned speech in support of the motion, Trinity College Dublin Students’ Union (TCDSU) President Gabi Fullam challenged what she perceived as the many failures of the government, calling out that “most people deserve better” than what has been allowed to them by the current government. The crux of her argument revolved around a list of 13 ideas she believed would improve the nation if the government were to pass them, which involved “legislat[ing] birthright citizenship for children born after 2005”, protecting students from exploitative student accommodation, a national referendum on the right to housing and establishing a national living wage. Speaking to The University Times, Fullam made it clear that she was speaking in a personal capacity rather than as a representative of TCDSU.

Finishing out the night, Trinity student Ryan spoke for the opposition with the stated goal of “lower[ing] the tone of the debate”. Drawing a laugh, he joked that “the only thing less democratic than a Phil election is a Sinn Féin election”. Ryan acknowledged that the government had real problems, especially the housing crisis, but did not have faith in the alternative solutions presented that evening. “The revolution will not be starting in Dún Laoghaire”, he said.

In a statement to The University Times following the debate, Phil President Ellen McKimm stated, “I think tonight was really interesting, I think it was a really important conversation to have! The function of the Phil in general is to have these kinds of debates and get actual proposition and opposition [speakers] on top of some interesting students”.