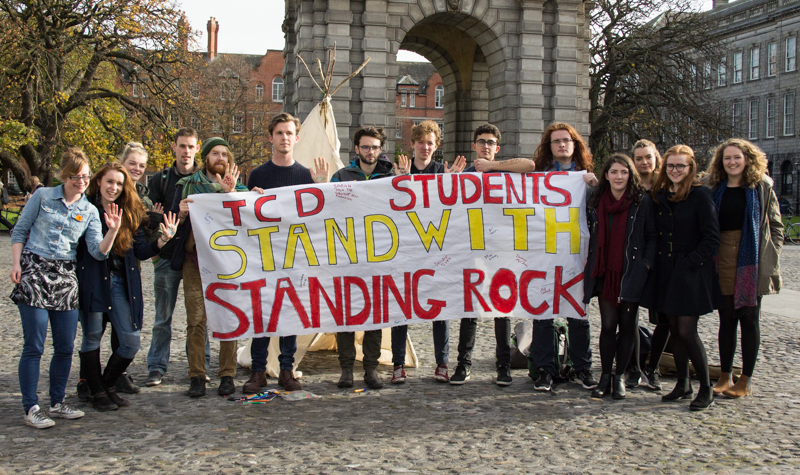 A protest in Front Square, organised by Fossil Free TCD, aims to demonstrate support for ongoing protests against the Dakota Access Pipeline, as well as highlight the €88,000 Trinity invests in three corporations involved in the controversial US project.

The three fossil fuel companies – Phillips 66, Enbridge and Marathon Oil – hold stakes of 25 per cent, 28 per cent and 9 per cent in the pipeline respectively, with Trinity having nearly €88,000 indirectly invested across these three companies through the university’s €6.1 million endowment fund.

The construction of the Dakota Access Pipeline has, in recent months, resulted in a series of protests at its construction sites due to its expected impact on drinking water in the surrounding area, its infringement on Native American lands and rights and the fact that the pipeline’s construction would enable the burning of large amounts of fossil fuels. The proposed pipeline would run from the Bakken oil fields in western North Dakota to southern Illinois, crossing beneath the Missouri and Mississippi rivers as well as part of Lake Oahe near the Standing Rock Sioux Reservation.

The pipeline’s planned route would greatly impact the Sioux tribe of Standing Rock, threatening the tribe’s water supply as the Dakota Access Pipeline would flow under the Missouri River. The construction would also disrupt burial grounds of the tribe and result in a loss of land for the tribe.

Recently, the situation at Standing Rock has escalated. Activists, including Native Americans, environmental activists and those standing in solidarity with the group, have gathered to block the construction of the pipeline. However, on Thursday, October 27th, police with tanks, riot gear and pepper spray surrounded the group and arrested 141 protesters, pushing the group off the site.

It was revealed in a freedom of information request that, as of June 30th, 2015, Trinity had €6.1 million indirectly invested in oil-related stocks, managed by Irish Life Investment managers. This figure equates to 3.5 per cent of the total value of Trinity’s endowment fund.

Speaking to The University Times, before today’s protest, Colm Tong, one of the founding members of Fossil Free TCD, said that the aim of the demonstration is to give people a concrete cause to rally behind. “We’re going to try and get people to write down messages of support and solidarity that will be put up on social media, so they can see that and we’re looking at doing some sort of creative action”, he explains. “Just trying to get people to participate and to understand and engage in what’s happening”.

Áine O’Gorman, another founding member of the group, explained that they’re hoping this will be something that “people can feel like they’re contributing or take something away”.

Fossil Free TCD is a campaign group supported by the Trinity College Dublin Students’ Union (TCDSU) with the goal of seeing Trinity divest fully from its oil-related stocks. The group’s divestment campaign follows similar campaigns in universities across the globe, with over 650 campaigns in higher-level education institutions in North America and 250 campaigns across Europe.

The group’s campaign has included the group presenting a case to the College Finance Committee for divestment in March of this year as well the publication of an open letter calling on the College to divest, which was signed by more than 80 public figures, 27 Trinity professors and the world-famous linguist and philosopher Noam Chomsky.

The pressure put on by Fossil Free TCD, described by Provost Patrick Prendergast in an interview with The University Times in September as “fierce”, has led to a report being developed by the Finance Committee, in which it will outline its position on divestment. The report is due to be published in November.