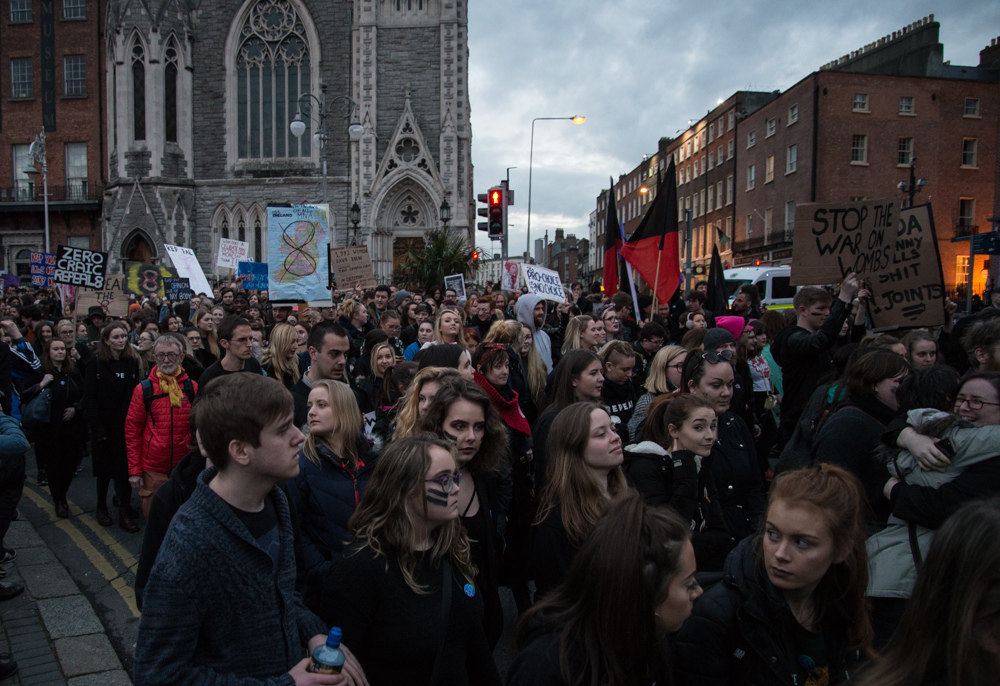 An estimated 8,000-10,000 people walked from the Garden of Remembrance this evening to call on the government to hold a referendum on the eighth amendment, with students from across the country swelling the size of the crowd as it moved towards Dáil Éireann.

Students’ unions, trade unions, NGOs and activist groups joined the crowd on its way into the centre of the city, with the march passing along O’Connell St, which had been brought to a standstill for hours earlier in the day by the size of the Strike 4 Repeal demonstration.

The march, one of the largest protests so far for the repeal the eighth movement, which chanted and shouted as it marched from the Garden of Remembrance, could be heard from Trinity’s Front Square when it arrived at the Dáil.

The march this evening, while still predominantly made up of students and youth groups, attracted a wider range of groups than the earlier demonstration, including Midwives for Choice, Parents for Choice, Labour Youth, Amnesty International and Non-Binary Ireland.

These groups, alongside many more across Ireland, are all calling for a referendum on the eighth amendment, an issue that has attracted a steady stream of international scrutiny and criticism in recent years. Last June, the UN called for the prohibition on abortion in Ireland to be reversed, describing it as cruel and inhuman.

Last September, over 1,000 people, including many of the same groups who attended the various demonstrations today, marched a similar route, calling for a referendum, as part of the annual March for Choice.

Since then, the issue has only grown in prominence, and is a regular feature of debate across the national media. Youth groups have been particularly vocal about the issue, and thousands of students and young people wore pro-repeal badges and jumpers to both the strike and march today. 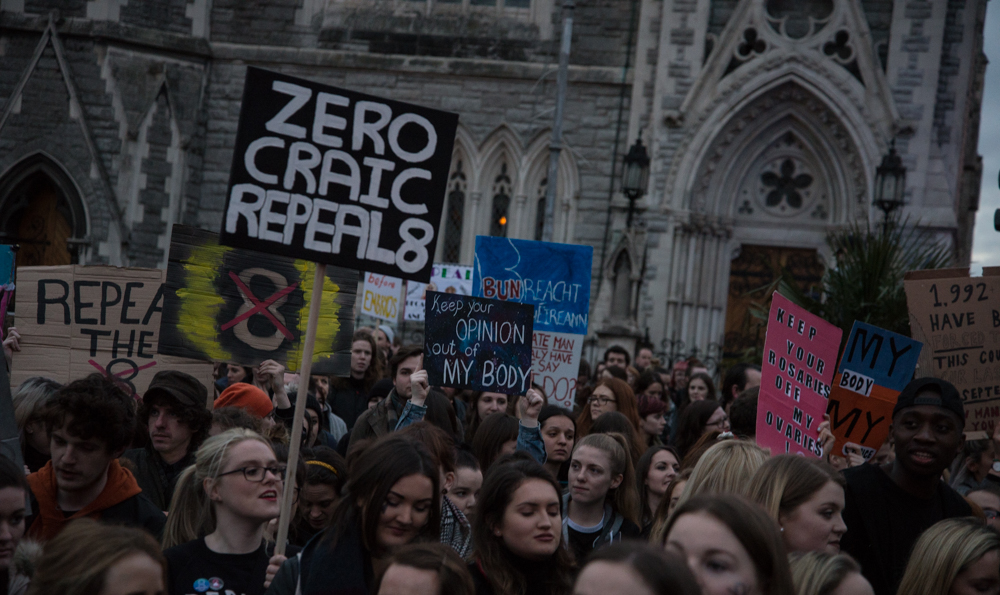 Unions across the country, including Trinity College Dublin Students’ Union (TCDSU), made formal submissions to the assembly. A recent poll in the Irish Times revealed a significant split in the support for the eighth amendment and its various alternatives.

While many Dublin-based students’ unions attended the earlier Strike 4 Repeal, others decided to hold demonstrations on their own campuses, before attending the march this evening. Maynooth University Students’ Union (MSU) attended the march after a large rally on campus at 12.00pm for Strike 4 Repeal, with Dublin City University Students’ Union (DCUSU) bringing approximately 80 students and staff to this evening’s march, according to their Vice-President for Welfare and Equality, Cody Byrne.

Other unions, such as Dún Laoghaire Institute of Art, Design and Technology (IADT), also attended the march, with the union bringing over 50 students to join the protest.

Speaking to The University Times earlier today over email, Dillon Grace, President of MSU, said that the union “have been running different social media campaigns and working with fem soc and strike for repeal to collect Anonymous Maynooth Students Stories”.

The Strike 4 Repeal protest earlier in the day, which saw demonstrators, wearing black and carrying placards and signs, called for a referendum on the repeal of the eighth amendment. Estimates this morning suggested that over 3,000 people had attended the demonstration. Students’ unions were well represented at the demonstration, with over 300 students from Trinity College Dublin Students’ Union (TCDSU) and 200 students National College of Art and Design Students’ Union (NCADSU), in attendance, alongside other unions from across the country.

Sinéad Baker and Róisín Power contributed reporting to this piece.