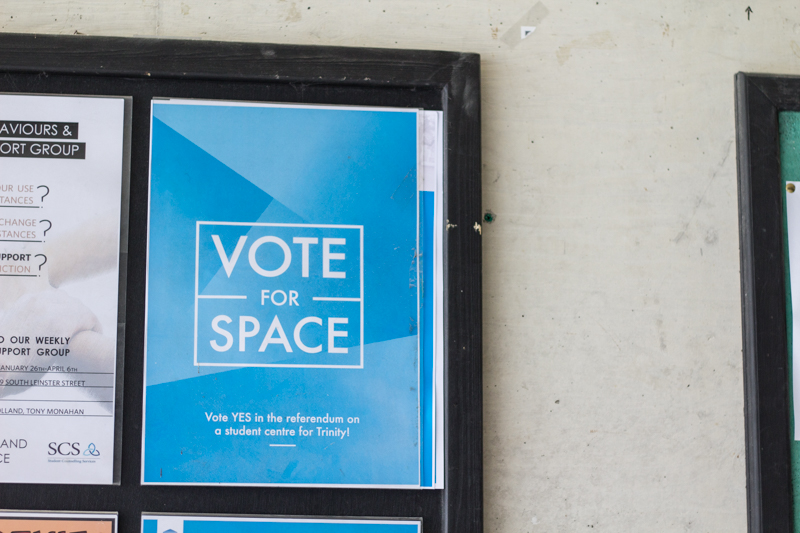 Trinity is one step closer to a new student centre, after 88 per cent of voters chose to accept an annual levy of €30 to contribute to the construction of a €7 million purpose-built student centre.

On a turnout of 1,304, only 11 per cent voted to not support a new student centre. One per cent of votes were spoiled. The vote means that, from next year onwards, Trinity students will start contributing financially to the new centre. While the exact location is yet to be decided, likely locations include the site of the current College Health Centre, 200 Pearse St and the disused Biochemistry Building.

The centre, which will take up 1,000 square metres of on-campus space, is expected to be built within the next five years. Plans for the construction of the centre have been included in Trinity’s Estate’s Strategy, which is currently being developed.

Speaking to The University Times, Trinity College Dublin Students’ Union (TCDSU) President, Kieran McNulty, said he was “delighted that students have voted to build a student hub and a home in Trinity and more spaces”.

He’s looking forward to the spaces being open very soon, he added.

The vote means that the Capitations Committee will recommend the implementation of the levy to the College Board. Trinity’s senior officers, including the Bursar, have been positive about the development.

Students will pay an annual €30 levy for around 20 years starting from the beginning of the 2017/18 academic year. Students graduating up until the 2019/20 academic year will not see the centre finished and, as such, will not be levied. Students who are deemed to be in financial hardship will be exempt from the levy.

The collected levies from the first two years will be used to improve existing student spaces and the incorporate new spaces into other College buildings.

In addition to money raised by the levy, College fundraising efforts and a loan will be used to front the cost of building the centre, according to McNulty.

The purpose-built student space will include offices, common areas for students, multi-purpose event spaces, a retail unit, as well as kitchenettes and breakout rooms.

Support for the levy is contingent on a guarantee that the development of the centre shall not diminish the status of House Six as a centre of student activity, and that it shall not reduce the amount of space available in House Six for the use of students.

A vote on the matter was proposed by the College Capitations Committee, in light of a provision in the Student Charter that says students should “have the opportunity to vote on issues that affect the entire student population such as levies”. Though this week’s vote was billed as a “referendum” by TCDSU, students were actually participating in a consultative vote that was merely facilitated by the union.

Speaking at a meeting of the union’s council in February, when the referendum was announced, McNulty explained that, under the agreement they had reached with College, the student centre would go ahead pending the assent of students to a levy.

McNulty ran for president of the union on a platform of lobbying for a student centre.

In 2011, a similar vote on a levy for a €40 million student centre failed, when Trinity Foundation announced it was to pay only half of a previously agreed €7 million contribution, a move then- TCDSU President Nikolai Trigoub-Rotnem called a “massive kick in the face”. There was also confusion over who would be charged the proposed €80 levy.

The Estates Strategy was written in conjunction with Turnberry Consulting, whose report last year on spaces in college concluded that Trinity’s infrastructure was lagging behind that of other comparable universities.

The proposals for new student spaces laid out in Trinity’s Estates Strategy come at a time when student societies are struggling with the College’s management of space to such lengths that their day-to-day running is hampered.