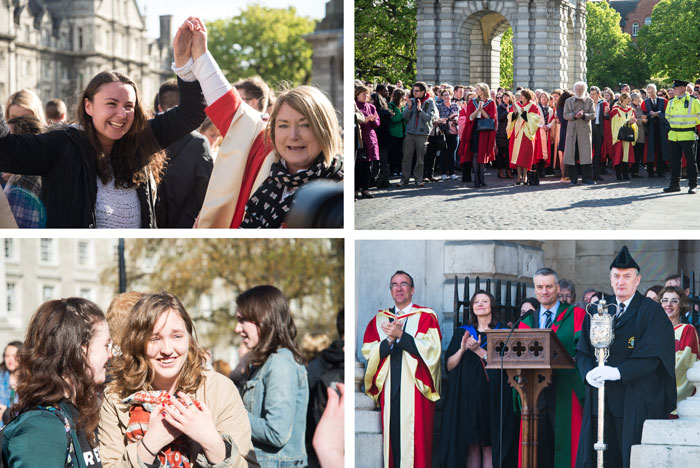 As part of one of Trinity’s longest-standing traditions, Provost Patrick Prendergast announced the election of 55 scholars, 10 Fellows, four Professorial Fellows and one Honorary Fellow on the steps of the Public Theatre as part of Trinity Week.

The honorary fellowship was awarded to Prof Roy F Foster. Foster, a well-known critic and broadcaster, is a Trinity graduate who became the first Carroll Professor of Irish History at Oxford and a Fellow of Hertford College. Foster currently holds a part-time position as Professor of Irish History and Literature at Queen Mary University of London.

Trinity refers to election to scholarship as “the most prestigious undergraduate award in the country”.

Wth 55 scholars elected, recent trends that have seen a decline in the number of scholars elected every year has been reversed somewhat. Fifty scholars were elected in 2016 compared to 99 in 2014.

Aside from the work required over Christmas, the scholarship examinations are perhaps best known for the perks that students receive for being successful in the examinations, including being eligible for accommodation on campus or in Trinity Hall free of charge, to have their tuition fee paid for and to attend Commons for free.

Fellowship is awarded to those who can prove “scholarship or research achievement of a high order” coupled with “evidence of the candidate’s contribution to the academic life of the College”, including effective teaching.

Scholarship and Fellowship have been some of the most enduring aspects of Trinity life. When Trinity was founded in 1592, the Foundation Charter cited the Body Corporate as consisting of the Provost, the Fellows and the Scholars.

A full list of those announced today is available here.