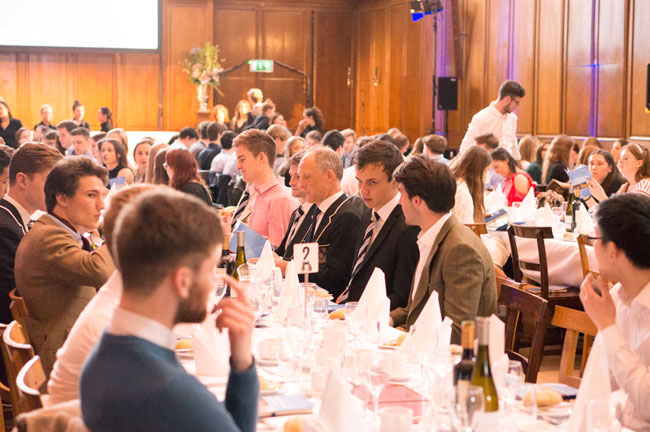 Pomp and ceremony was the order of the day at the Trinity Sports Awards and Commons last night, a three-course meal preceding a Q&A style session with Leinster and Ireland fullback Rob Kearney and Irish international cricketer Ed Joyce, as well as the small matter of the awards ceremony itself.

A noisy group, comprised mostly of athletes, descended upon the Dining Hall at 6.15pm sharp. First, they were treated to a walkthrough of the many successes of Trinity’s sporting institutions this year, announced by Dublin University Central Athletic Club (DUCAC) Vice-Chair, Monty Badger. However, sport was soon forgotten, albeit only temporarily, as players and journalists alike tucked into a lavish three-course dinner, replete with an abundance of wine.

Appetites sated, heads turned once more to the stage. The evening was hosted by RTÉ’s Evanne Ní Chuilinn. A former student of University College Dublin (UCD), Ní Chuilinn began with a rowdily-received quip about the rivalry between the two colleges. She was joined on the podium by Kearney and Joyce and quizzed them about their respective sporting careers. Joyce, as an alumnus of Trinity, reminisced fondly about his college cricketing days, remembering them as “some of the best times I ever had playing cricket”. Kearney also joined in the fun, admitting with a sheepish grin to an unsuccessful attempt to gain entry to Trinity as a student before ending up in UCD. The response to this was, predictably, uproarious.

Next up on the agenda was the Pinks awards, in which pink scarves and ties are handed out to sportspeople in Trinity who have excelled. Speaking with The University Times, President of DUCAC, Donagh McDonagh, said that “the pink as far as I’m concerned is the highest sporting award that anybody can be given by Trinity College Dublin … At the captains committee meeting which I chaired a week ago and looking at the CVs or the sporting careers which were put in, they were shocking in their intensity, shocking in their ability, amazing people who richly deserve the award which has been given to them”. McDonagh commended Donna Rodgers Lee in particular for her sporting achievements in sub-aqua. Eighteen Pinks were handed out in total, which each recipient visibly thrilled to receive one. In his final words, McDonagh jokingly encouraged Rob Kearney to undertake a degree in biblical studies if he ever wanted to become a graduate of Trinity.

It was a particularly momentous night for the Trinity hurlers, who had been shortlisted for six different categories – a massive increase from last year. They took home three of these awards, with best club administrator going to Freshers Coach Leon Breen and performance of the year going to the Trinity Freshers, who won both the all-Ireland league and championship this year. Fresher Cian O’Sullivan also picked up Sportsperson of the Year, a great personal achievement. Speaking to The University Times about the wins, Breen said: “This year to be nominated for six and to get half of them is unreal … we couldn’t have asked for anything better and the year that was in it we really deserved it.” The hurlers picked up the most awards of the night.

The ladies hockey team were a close second, picking up two awards, one for best coach which went to former graduate Brian Scully and the other for team of the year which went to the Ladies Hockey First XI. Speaking to The University Times Scully remarked that “in this day and age in modern sport being a good coach is about having a great team on the pitch and a great team supporting off the pitch … we’re hoping to be one of the elite ten teams next season”. The ladies hockey team won Leinster ladies division one, which is the highest provincial division in hockey. Next up is the playoffs for the all-Ireland division which they will be playing in the next few weeks. Speaking to The University Times upon receipt of the award for team of the year, captain Niamh Sweeney expressed her delight: “It just caps off an unbelievable season. At the start of the season, the end of last year, we didn’t know where we’d be this time next year. We thought it would be a season where we had to build, losing so many players, but we couldn’t have asked for any more, and this is just the icing on the cake.”

Winners of the club of the year were Dublin University Fencing Club (DUFC). Described on these pages as a “winning machine” in February, the club have since clinched their 10th successive intervarsities title, and on Thursday the 30th of March defeated UCD at Colours for the fourth year in a row. A small but noisy subgroup in the centre of the hall, they had every reason to be cheerful. “I feel fantastic”, club Captain, James Bryant, told The University Times, “but I’m more proud than anything else. It means so much to every level of the club, as opposed to just the top athletes and the novices. The alumni, everybody was involved in this, so it means a tremendous amount.”

It was not only current athletes and clubs who were being honoured, however. Prof Cyril J Smyth, former president of Dublin University Harriers and Athletic Club (DUHAC) and current Chairman of the Pavilion Bar (the Pav) Committee, was rewarded with the prize for Outstanding Contribution to Sport in Trinity. Michelle Tanner, Head of Sport, paid tribute to the work of Smyth throughout the 30 years he has spent in Trinity. His award was greeted with the warmest of ovations.

The ceremony complete, it was left to Badger to wrap up proceedings. He described the pride he felt at having watched the College’s various sporting clubs “embody the Trinity sporting ideal” over the course of his tenure in office. In his inimitable manner, he invited all those present to retreat to the Pav, “where we shall drink to our sporting successes this year”. You wonder if DUCAC will pick up the tab.