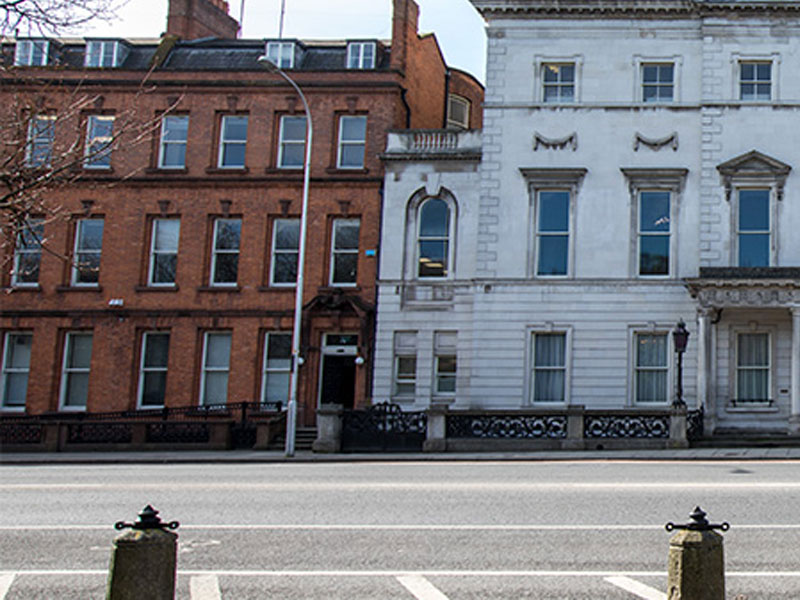 Trinity BDS this afternoon occupied the offices of the Department of Foreign Affairs, calling for the expulsion of the Israeli Ambassador to Ireland.

Around 20 protesters occupied the inside of the department while another 30 were outside the building.

Shouts of “sanction Israel” and “free, free Palestine” could be heard from the protesters.

A press statement from Trinity BDS stated: “We are demanding that the Irish government: Expel the Israeli ambassador from Ireland immediately; Cease all trade with apartheid Israel, and impose other economic and political sanctions on Israel; Use Ireland’s voice on the UN Security Council to condemn Israel’s actions in Palestine in the strongest possible terms.”

It added that “the ‘ceasefire’ agreed between Israel and Hamas does not apply to Israeli apartheid and the continued persecution of Palestinians, and so we continue to demand sanctions on the apartheid Israeli state”.

“Since the ‘ceasefire’, hundreds of Palestinian people have been arrested across the West Bank for partaking in protests against their own ethnic cleansing.”

The group added: “The apartheid, settler-colonial regime that has plagued historic Palestine for the last century continues today and will continue until Israel lifts its military blockade on Gaza, ceases its military occupation of the West Bank and allows displaced Palestinian people to return to their homes in historic Palestine from which they have been expelled”.

“Justice for Palestine”, the statement continued, “means dismantling the apartheid Israeli state and creating a single, secular state where all people are afforded equal rights and opportunities regardless of their ethnicity, and where those Palestinian people forcibly expelled from their homes and villages can return safely”.

The Boycott, Divestment and Sanction (BDS) movement is a Palestinian-led campaign which works to end international support for Israel in the context of the country’s treatment of Palestinians.

The long-term policy mandates the union to support the movement and “comply with the principles of BDS in all union shops, trade, business and other union operations” and to lobby College and the government to adopt a policy of boycott, divestment and sanction of Israel.

The long-term policy would also see the introduction of a boycott, divestment and sanction implementation group within the union.