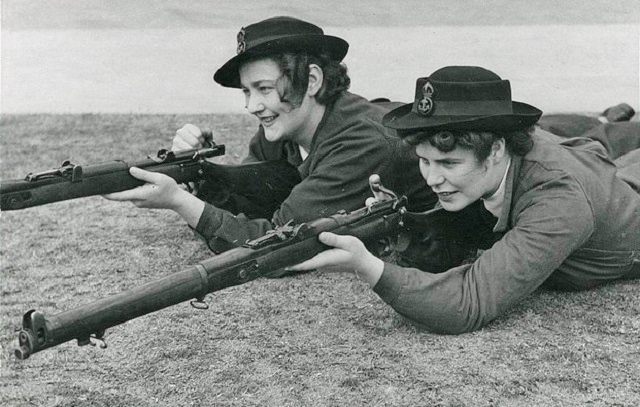 Most Irish people grow up hearing vague references to the accounts of Constance Markievicz and her involvement in Ireland’s revolutionary period. However, after Constance Markievicz has been named, most of us are at a loss to think of a second female Irish revolutionary figure. Few of us realise how widespread female involvement in the Irish revolutionary process was. Éamonn De Valera infamously once said that had they allowed women in his garrison at Boland’s Mills, the quality of their food would have been significantly better. While such a comment can be flagged as being offensive, it may not be immediately clear as to why that is.

One person determined to erode this historical blindness is Liz Gillis, author of Women of the Irish Revolution, a photographic history of female involvement in the revolutionary movement. Speaking to The University Times by phone, Gillis, who works for Kilmainham Gaol, spoke of her recent talk in Trinity on this subject. On Monday October 5th, the Gender Equality Society hosted a talk with Gillis entitled Women of the Irish Revolution, 1913-1923 in which she discussed the influential presence of women in Ireland’s revolutionary years. Gillis explains that the scope of the talk she gave was wider than that of the book. She says it “was more to highlight the less well-known women that were involved, and not just focus on 1916 but to show what they did after it, in the War of Independence and then the Civil War, and then touch on a little bit later on.”

Gillis mentions how she wished to demonstrate their role in later years, stressing that intelligence was such an important part of the War of Independence. She points out that women had a vital role to play in Michael Collins’s intelligence war against the British government. To demonstrate this in her talk, Gillis used photographs which had been sent to her by family members, and which had formed the basis of her book. Addressing the stereotypes of the women remaining in the home during war, Gillis says that while it is true that “in 1916 they were doing first aid and cooking for the garrisons and so on”, they were also bringing weapons to and from each of those garrisons.” With the War of Independence and the civil war mere years in the distance, Gillis points out that “1916 was a training ground for them, for what was to come next.”

While she noted that the women were ultimately the losers in independent Ireland, as non-combative figures, she highlighted the fact that women concentrated their efforts on local politics, on making a difference on the ground.

When asked what questions her audience brought up, Gillis says a heavy focus was put on the female reaction to the Anglo-Irish Treaty, with students asking whether it was as divisive for the women. Gillis explained that it certainly was, mentioning that the women had had an active role in the War of Independence. Indeed, many felt as cheated as their male counterparts did by the terms of the treaty. The anti-treaty contingent included widows of those who had died in the struggle for independence, but also women who had played an active role themselves.

One of the most interesting topics broached by Gillis in her interview with The University Times was the longevity of the involvement of these women. While she noted that the women were ultimately the losers in independent Ireland, as non-combative figures, she highlighted the fact that women concentrated their efforts on local politics, on making a difference on the ground.

Gillis explained that women served another purpose in being employed as decoys and diversions when raids took place. She spoke of how the girls would receive a phone call alerting them to a raid taking place. They would then “walk out hand in hand with an IRA man” and in that way “they were seen to be a young couple”, thus avoiding detection. Of course, women did fill more traditional roles as nurses and cooks in the garrison too. A quote attributed to Napoleon asserts that “an army marches on its stomach”, and it serves to highlight the importance of these traditional roles to the maintenance of a revolutionary movement.

When asked how she felt women were being treated in this decade of commemorations, Gillis highlighted the centenary commemoration of Cumann na mBan, championed by the Irish Women’s History Association of Ireland and later endorsed by the government. She stated that there is a movement to remember them, and their involvement in events which are being commemorated.

Life went on as normal for the people of Ireland. Of course, this not only applies to the revolutionary women, but to women who raised families on their own while their husbands, brothers and fathers fought in the British Army in World War I. The common theme here is of women carrying on with life, attempting to carry on with a way of living that was changing irrevocably.

The role of women in our revolutionary history is often overlooked and under-researched. Writers like Liz Gillis are changing that with their ongoing work in this field. De Valera’s cooking comment is as offensive now as it was the day he first made it, with one key difference. People are now actively working to challenge and interrogate the assumptions that have been made about female involvement in the revolution. With a pronounced growth in the scholarship in this area and an ever-increasing interest in the role of these women, the story of these forgotten participants is finally being woven into a more inclusive narrative.

These women’s lives will no longer be a throwaway story told when all the male revolutionary stories have been exhausted. We are at last beginning to realise that the bravery and determination of these women, is an intrinsic part of the revolutionary narrative. As 2016 draws ever closer, it is vital that we remember these women who risked their lives for the cause of Irish freedom and were subsequently omitted from the history books.