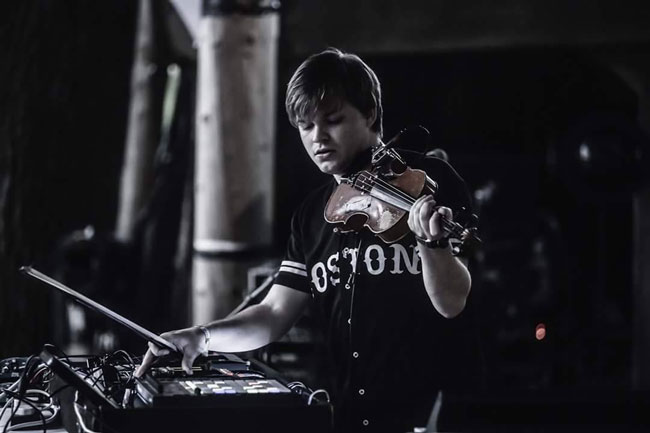 Before opening Freshers’ Week with a sold out gig in District 8 in collaboration with Trinity Ents, An Cumann Gaelach and the College Historical Society (the Hist), I had the chance to sit down with Daithí Ó Dronaí and get to know that guy who plays the fiddle while he DJs. As one of Ireland’s freshest takes on electronic music, Daithí remains humble and down-to-earth despite so much recent notoriety. Devling into his life in music thus far, we also investigate Ireland’s unique music scene and what it means to be making electronic music today. For this county Clare native, however, it hasn’t always been about electronics.

Coming from a strong traditional music background, learning to play an instrument was as natural and expected of Daithí as learning how to walk. Taught to play the fiddle by his aunt, for years it was “just one of the activities that kids do outside of school” and took a backseat to playing bass guitar in bands during secondary school. After a “hibernation period” in his last two years in secondary school as a boarder “writing music non-stop and doing nothing else”, Daithí tells me he left school with the clear idea. “I wanted to write music as much as I could.” Returning to the fiddle once at university, he got his hands on a loop pedal and suddenly his direction changed. “I was always interested in electronic music, but I didn’t know how to make it. Over time, I realised that the main thing I like doing is getting people going, getting energy moving in a room. I suppose I naturally fell into dance music because of that.”

Entering TV talent competitions in Ireland and the UK, Daithí used the fiddle and the loop pedal to layer sounds and create a piece of music live on stage. “The shows were a serious learning curve. They made me sit back and evaluate what I really wanted to do and how I wanted to go about it. As soon as they were done, I went back to Galway and started playing live to people, at square one. You can go two very different ways, two clear paths when you finish a show like that. You can start going the corporate way, make appearances, you go the celebrity way. Or you can take a turn and just decline all that stuff, and just go for music. That’s what I did.” Since then, Daithí’s sound has recognisably matured and developed.

“What I was doing then is so completely different to what I do now that sometimes people don’t realise I’m the same person”. Laughing, Daithí notes that his music would maybe want to evolve to keep people interested. If it didn’t, people wouldn’t know his name now.

Daithí then explains how it can often be difficult to be introspective when making electronic music. Adding feeling and emotion to the music is a lot more difficult that just sitting down with a guitar. When it comes to electronic music, Daithí feels that “there is not much point making albums anymore” and the last three years have seen him lean more towards EPs: “In my upcoming EP, I really want to try and encapsulate the West of Ireland through dance music. I really like the EP set up now, as it gives you these bite sized projects you can work on.” Comparing it to his album In Flight, the producer’s most recent EP, Tribes, was a platform through which Daithí could announce that he wasn’t going to be making “normal, run-of-the-mill dance music”. For Daithí, being able to add emotion to your music is the very essence of being a good producer.

We discuss how his music comes together and how often it is not plain sailing. Being in the studio is important, but not without its drawbacks: “I have a little studio in Galway that I go to as kind of a nine-to-five job as much as I can. I’m about to release another EP and this one is different because I kind of saw a problem with that. You’re stuck in this room for a long period of time without a huge amount to go off. This year, instead, I travelled a lot and I recorded the EP in different Air BnBs along the west coast of Ireland. Getting out to the coast totally jumps your creative ability. I brought the singers down there and it really got them to focus on what we wanted to do.”

Daithí has referred to Sinéad White, a singer with whom he work with on Tribes as having a very “Irish quality” to her voice. I ask him if he feels contemporary music being produced in Ireland today has a particular sound: “I think it depends on the artist. For example, New Jackson, I think that is really the sound of Dublin. The idea of taking stuff from your environment and making it into music, anybody who does that is really, really special and that’s what I want to do.” It is clear that staying close to his roots is an important element in his music production, and he has managed to incorporate this seamlessly in his work: “I’m releasing a new track in a couple of weeks and [Sinéad White] is on that as well and we just went home on that one. It sounds like The Corrs mixed with Sinéad O’Connor, we put this little seanós lilt in there – it’s so cool.”

Live shows are what I’m all about, it’s what I love to do and what I make music for

Something that sets Daithí apart from others in dance music production is his live shows. “Live shows are what I’m all about, it’s what I love to do and what I make music for. Something really special for me is that everything I play in a live set is my own.” I ask him what attracts him to remixing, he notes lightheartedly that “maybe selfishly, if I hear an amazing vocal or something I really want to have it in my live show. If people recognise an acappella or something and can sing along it really gets them going, and they are more accepting of what is going on underneath”. Daithí is not fussy about the genres of music he incorporates into his sets, and in fact has a refreshing outlook on music in general. He tells me that you discover a lot more music if you have no preconceptions. “Sometimes you just have to throw cool out the window. A lot of people won’t listen to pop music because they have a preconception of it, that it’s this manufacture thing. But it’s still awesome.”

I ask him if he will ever move away from using the fiddle, and the answer is a firm no. “I don’t think I’d ever stop using the fiddle. It is a great thing to have in a live show, you can see the crowd react to it. One of the best things about the fiddle is that you can do so much with it. Technology is moving so quickly now that I can play a note on the fiddle and it translates to a synth, so I’m never limited. It also feels natural to me.” I wonder who Daithí takes inspiration from in his work, and we chat a little about the music industry in Ireland.

Something I notice is that Daithí is not afraid to commend other artists, even in an interview focused on his own work. He is a fan of Caribou, and was heavily influenced by his use of the sound of water in his work. He lets me in on his relationship with Irish band Le Galaxie: “Le Galaxie have been my dads for years. It’s been really good to have them there.The first gig I ever went to in the Róísín Dubh was Fight Like Apes and Le Galaxie were supporting them. Since then, we’ve done so many gigs together, they’ve always been in a part of the community in the Irish music scene that I was in. One of the best things about the Irish music industry is that it’s like a big family. There seems to be way more competition out there in places like London, for example. We support each other here. It’s nice.”

One of the best things about the Irish music industry is that it’s like a big family. There seems to be way more competition out there in places like London, for example. We support each other here

Finishing up, I ask him about his collaborative work, and who he would like to work with in the future: “I’d love to hear someone like Sinéad O’Connor do a really good house track, or someone like Róisín Murphy. I’m a big fan of vocals in dance music that mean a tonne, so I suppose I’d like to work with someone who had a really good writing skill.” We finished our coffee and chatted some more about gigs Daithí played recently, Irish festivals and other Irish artists. “It’s been a really great year, people have been so receptive.”

I was warmed by how grounded and open my interviewee seemed to be. Having spoken with him, it became incredibly clear that his music is representative his music is of him as a person. Daithí’s sound is honest and pure, and resonates through and through with a genuine sense of love for what he does. He understands how to manipulate electronic music and make something different of it and I firmly believe that he is succeeding in his attempts to give meaning to his work. After two crowded live shows in conjunction with Trinity, at last year’s Trinity Ball and on the Monday of this Freshers’ Week, it is obvious that Daithí’s music is falling upon the ears of people in ireland with fruition. The music he produces is fun yet comforting, and sets him apart from many of his counterparts in the industry. I am excited to hear what Daithí releases next and where he will take his sound, and you should be too.