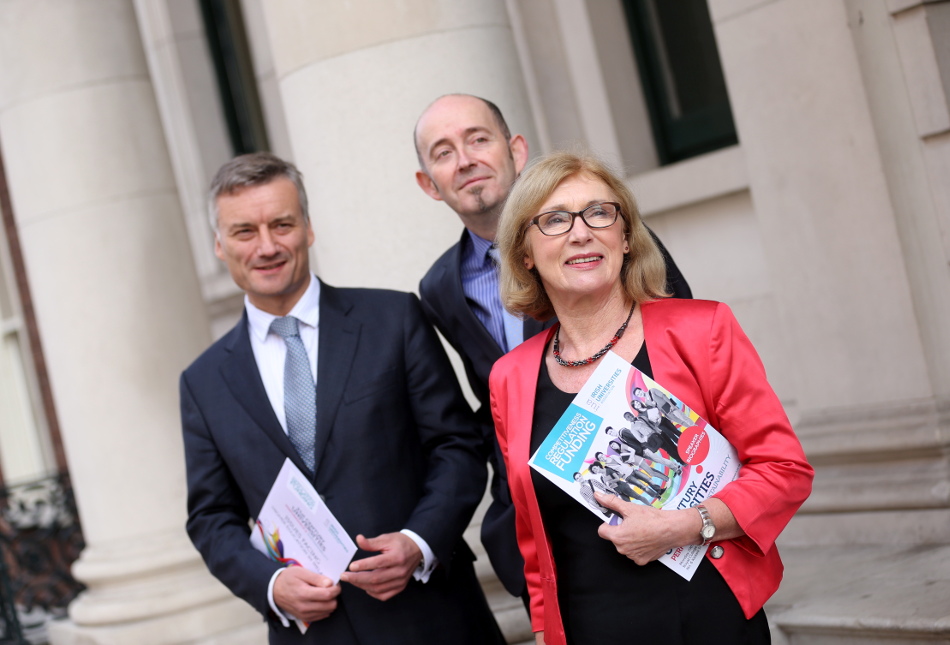 It was only around the corner from the offices of the Irish Universities Association (IUA) that, last October, over 10,000 students and activists from across the country marched on Merrion Square, calling for more money for higher education. This wasn’t their only demand, however. Over the shouts and cheers, speaker after speaker addressed the crowd. Their message was clear: the government should reject those becoming increasingly vocal about a loan scheme to fund higher education.

It’s tempting to wonder what the IUA were doing that day. It’s commonly known that the IUA see student loans as a viable option going forward. The organisation represents the seven Irish universities with the provosts and presidents of each sitting on the IUA’s council alongside the Chief Executive Officer, Ned Costello. In an interview with The University Times, Costello describes the IUA’s role as engaging in “advocacy for the sector” and “contributing to policy for the sector”. What this means, ultimately, is that the organisation acts as a lobby group for universities.

Costello is under no illusion as to the current distaste most students have for the proposed implementation of a loan scheme. “If I were a student, I would prefer somebody else to pay the charge for me than have to pay it myself”, he admits. The IUA, however, aren’t students and according to Costello it is their duty to perform as “rational economic actors”.

The IUA consists of a number of standing committees and working groups which represent different functions. This system allows open communication between the various areas, such as academic affairs and human resources, and the seven universities. “It’s actually pretty easy to bring people together and people know each other well and that makes things easier”, says Costello. While admitting that there “isn’t complete commonality of view among seven diverse institutions on everything”, Costello notes that “there are more times when the institutions agree than when they disagree”.

If I were a student, I would prefer somebody else to pay the charge for me than have to pay it myself

One area where the university heads were unanimous, Costello says, was over loan schemes – all agreed it was the best option to support. If such a scheme isn’t implemented, Costello believes the country has three options. The first is that the government “do nothing” and leave the charge as it is. This would, according to Costello, leave the government with the option to “pick up the slack or not”. Option number two would see the charge remaining an upfront payment but rising in value to “generate extra resources”. The third option he envisages is to look at the size of the system as a whole and work out whether it is possible to secure the funds needed through taxation. Costello believes that the public would “react very negatively” to the latter option due to the “high demand for higher education”.

Costello falls back on the “life argument” stating that “the fundamental basis for a possible loan scheme is that there is a strong argument for someone reinvesting in their education proportional to what they have done as a result of their education”.

He argues that the government’s failure to take a stance on the issues raised by the report of the government’s higher education funding working group, commonly known as the Cassells report, has left bodies like the IUA, who are trying to convince students that a loan scheme is a viable option, in limbo.

In an interview with The University Times last September, the Minister for Education, Richard Bruton, said Fine Gael were “open to the alternative funding mechanisms that Cassells has talked of, so we don’t come with a closed mind to any of the options”. He said he was open to compromise on the options, an idea he has only doubled down on since. Rarely a mention of higher education funding goes by without being framed in the language of consensus and compromise.

After two reports, months of delays and working group members calling for a decision to be made, the fact that the government hasn’t come to a decision on a funding model is striking. “It’s very hard for any one group to go out and say to students that this is how it is because, at the end of the day, people feel ‘Well the government might make a different choice, why should we necessarily listen?’”, explains Costello.

Costello also remarks that “the state can’t pay for everything” due to EU fiscal rules. “Quite literally the rules and the automatic stabilisers just won’t allow it because we couldn’t borrow as a country of everything that we need to invest in”, he explains.

Rather than trying to control everything, he explains, the government would trust the institutions to do the things that they need to do to deliver

There have been middle grounds between free education and loan schemes. The Technological Higher Education Association (THEA), which represents institutes of technology, has suggested that students in level six and level seven wouldn’t pay any fees. Both THEA and the IUA presented their vastly differing proposals to the Oireachtas Education and Skills committee on the same day. This split between the two main bodies who represent the interests of all the main Irish third level institutions is intriguing.

When asked about the proposal, Costello states that he thinks “that model is problematic” and will achieve nothing more than “magnifying the funding problem”.

Costello rejects the idea that this divide between institutes of technology and universities is due to differing economic situations experienced by students at different levels of higher education. He goes on to explain that he “doesn’t support the idea that a particular level should be treated differently just because it’s a particular level or an argument that … the socio-economic circumstances of people that enter at level are different”. While admitting that a large proportion of these students are eligible for grants and therefore don’t pay fees, he further explains that he fails to see how taking the “30 to 40 per cent that currently do pay the charge” out of the system will result in an improvement in the overall funding situation.

While Costello was happy to see that the last budget was the first one in six or seven years that increased the amount of funding rather than decreased it, the IUA were “extremely disappointed” in the general outcome as they had “put a lot of effort into that advocacy on the money front”. Another aspect that they were disappointed in was the fact that a lot of the money was “earmarked funding” meaning that the government had already decided what areas it would go into. “It wasn’t money to improve the overall quality of higher education”, explains Costello.

The discontent the IUA feels around this earmarked money feeds into the larger issue of the autonomy of Irish universities. “We’ve had our difficulties in the past with the state trying to regulate higher education and you know we would continue to have concerns about that”, he notes. The European Universities Association, which represents universities across Europe, found that the Irish system does have high levels of academic freedom in terms of openness and transparency of recruitment, but less well on the state regulation of universities.

In light of Brexit, one of the issues being discussed in campuses across the country is the viability of a united Ireland. With three of the seven universities represented by the IUA seeing their student population voting to have their student unions support moves towards an united Ireland, I ask Costello if he foresees a stronger higher education system should a united Ireland be achieved. Costello considers what he calls a “hypothetical” situation and states that he doesn’t think “as a matter of principle” that one could conclude that. He explains that the two Northern universities “are better funded” and the success of the move would depend entirely on the “financial arrangements between Ireland and the UK”.

The IUA will, however, be lobbying the government in support of Northern Irish students not being subjected to international fees. This move is in line with the general opinion of universities across the country. University College Cork (UCC) and Trinity have both established Brexit taskforces to ensure that they are equipped to deal with the possible benefits and disadvantages of the UK leaving the EU. “The most important thing at the moment”, says Costello, “is that we maintain our contacts with the UK and we have good relations with the universities in the UK”.

Going forward, the IUA would like to see “more autonomy coupled with what has been developed in the last few years, which is transparency and accountability”. This would involve the state laying out what they want higher education to achieve and then the institutions sitting down the funding agency to explain what their strategies are in order to achieve this. This would require “allowing decisions on how the funding is made to be as close to the student as possible” which means the decisions need to be made within the institution and not elsewhere. “Rather than trying to control everything”, he explains, the government would “trust the institutions to do the things that they need to do to deliver”.

Going forward, Costello hopes that the IUA can continue to have an open dialogue with students and the public. “I think if there is a single biggest thing to be achieved, that would be it”, he notes. He also hopes that they “would be to continue to press for more flexible regulation so we don’t have the state making decisions that the institutions are capable of making for themselves”.