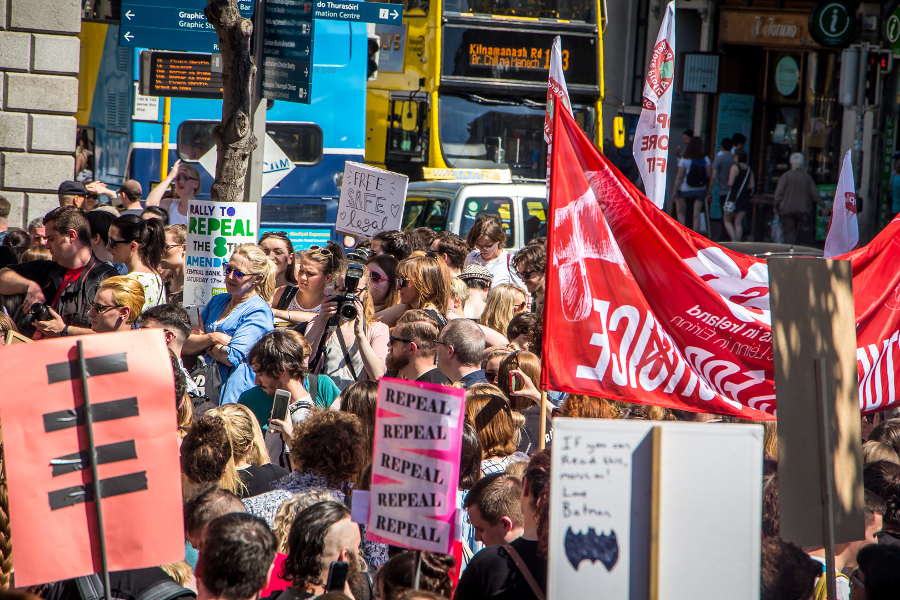 No doubt many people will have now heard that Taoiseach Leo Varadkar last Friday announced his intention to potentially hold the repeal referendum next June or July. I am currently calling it the repeal referendum, as are many people, despite the fact we have no clear indication if we will actually be asked whether we want to repeal anything or not. In fact, we have no idea what it is we might be asked come polling day. We don’t know if the question will be a straight yes or no or whether it will be a more convoluted plebiscite, listing out a variety of options for the electorate to sample. It is like waiting to see what we will get in our stocking on Christmas morning! Unfortunately, however, instead hoping for the latest gadget, we are praying the Irish people bestow us with the gift of bodily autonomy. And rather than all this taking place on a sublime December morning, there is talks of holding this long-awaited vote in the summer months. The announcement of a plan for a June or July referendum was met with widespread criticism, outlining concerns that this would disenfranchise young voters, and particularly students.

It has been both widely accepted and acknowledged that young people played a huge role in the marriage equality referendum. From touching videos of young people ringing their granny to talk about what marriage equality meant to them, to queues of students lining up to register to vote up and down the country, there was no question about the fact that young people were stepping up to the challenge and were ready to have their voices heard on such an important issue. However, all of this did not come without logistical challenges given a late May referendum date, at a time that many students and young people would either still be caught up in exams or off to pastures new for the summer. Most importantly, these pastures were in a different location to the one they had registered to vote in.

Instead hoping for the latest gadget, we are praying the Irish people bestow us with the
gift of bodily autonomy

It took a huge, nationwide concerted effort, led by the Union of Students in Ireland and students’ unions, to ensure everyone was registered to vote in the location they would be on May 22nd. Registrars and third-level institutions moved exam dates and times to facilitate students travelling to vote. Students pushed off leaving Ireland for J1s and summer works trips for a few days. Arrangements were made to fly home in order to vote. The coordination was immense, and well worth it in the end, but had the vote been pushed any further into May or June we would not have been able to manage it. Politicians and media alike commended young people on the contribution they had made to the marriage equality result. Why then, if politicians know the immense contribution young people made during that referendum, would they make it so very difficult for students and young people to potentially participate in the repeal referendum?

The government should do everything it can to ensure the rights of every citizen to participate fully in the democratic procedures used to govern this country. We already have an outdated and tedious system for registering to vote, with no option for automatic voter registration or to register to vote online. Eligibility for the postal vote is limited, and even if you are eligible, the process by which to access the postal vote is also cumbersome and quite frankly a nuisance. There is little to no education at school level about the political process and how best to engage with it. Mass voter registration drives, with the explicit intent of registering new voters, are pushed nearly completely by students’ unions and secondary-school students. And only a few months ago the Seanad kicked down the road a bill that would have extended the voting age to 16. Call me cynical, but none of the above gives me much faith that the government is in any way keen to get young people involved in the political process. Which is why the announcement of a plan to hold a June or July referendum is both maddeningly infuriating but not really all that surprising.

It is clear that, over the past few months and years, the repeal movement has gripped the attention of young people and students. There isn’t a single students’ union that has had an internal vote on their campus in favour of keeping the eighth amendment and campuses across the country have seen mobilising happening in earnest in recent months. Stalwart repeal activists, who have been on the front line of this campaign since 1983, are being joined by a mobilised and engaged cohort of young voters, who are standing united in their calls for the repeal of the eighth amendment.

The streets at the Strike 4 Repeal and the March For Choice were thronged with young people and students determined to make their presence known, placards seen and voices heard. On-campus actions have swept across the country, with both staff and students joining together in their calls for the eighth amendment to go. We as a country have been building up to this referendum since 1983, and the cross-country activation on it (on both sides of the argument) is a clear indication that we as a nation want our say on this and we want it sooner rather than later.

Ireland is now coming under international pressure to deal with our restrictive abortions laws too. A range of UN and EU committees have criticised Ireland’s restriction on abortion, drawing international condemnation at the fact that we allow women to travel to access safe abortion services, but refuse to provide domestic medical care, even in the most dire of situations.

In the past week, the UN Committee Against Torture, set up “to ensure adequate protection for all persons against torture and other cruel, inhuman or degrading treatment or punishment”, condemned Ireland for such restrictive abortion laws. How embarrassing for us as a nation to have a committee that was set up to hold states to account for torturing prisoners and inhumane treatment of its citizens to now be decrying Ireland from above for breaching the human rights of women. The committee subsequently directed the Irish government to enable law reform to ensure the current breach of women’s human rights is addressed. The committee also told the Irish government that it had a responsibility to explain to the public that if the state kept its constitutional ban on abortion, it would continue to breach the human rights of women. The Taoiseach subsequently dismissed these criticisms, saying: “One thing I would be very firm about is that whatever laws we have in Ireland, those laws should be determined by either the Irish people through a referendum or through the Oireachtas voting democratically.”

If the Irish government wants to demonstrate to our international colleagues that they are doing everything in their power to address these human rights abuses, then they cannot be seen to be holding the referendum at a time when voters could be disengaged or uninformed. Rather, given the severity of the human rights abuses at hand, the government should make plans to deal with this issue in a timely manner and not drag it out to the summer, or worse, beyond into the autumn.

We as a country have waited too long to have our say on the eighth amendment for this opportunity to be squandered away by ill-timing and lack of due consideration given to the voting population. We now must hold our Taoiseach to his own words and demand that the laws in relation to abortion in Ireland are decided by the Irish people, on a polling day that allows for full and active participation by all age-groups and all sectors of society. To do anything less would be a disservice to the population of Ireland, and a cruel kick in the teeth for every woman, family member and friend for whom this harmful eighth amendment has affected.

Annie Hoey is the Education and Training Officer with the Coalition to Repeal the Eighth Amendment and is a former President of the Union of Students in Ireland.