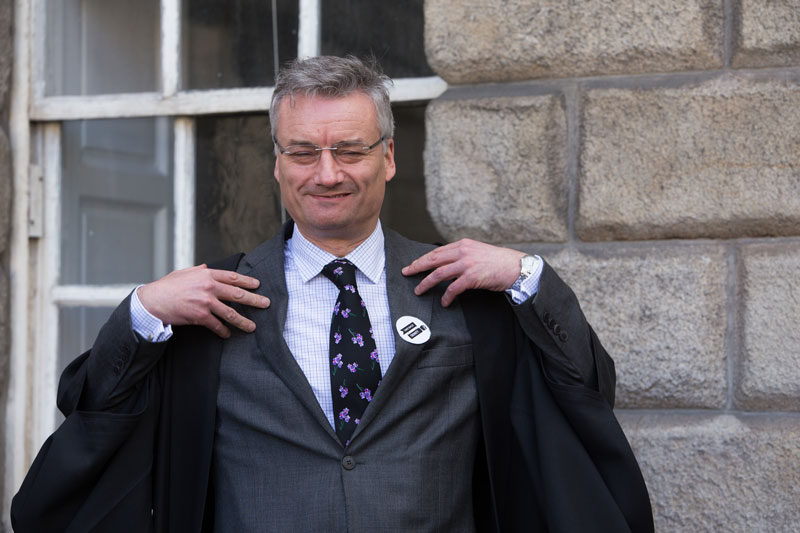 Provost Patrick Prendergast has praised the impact of this year’s Take Back Trinity protests, which he said helped “transform college life”.

Prendergast made the comments in his annual review, published this evening, and said students “successfully protested against a supplemental exam fee in the Take Back Trinity campaign”.

In the review – which also noted students’ role in the ending of single-use plastic on campus – Prendergast said the role of students in the governance of the College was “reinforced” last year.

Prendergast said the introduction of a student partnership policy last year “contributed to finding a solution through effective dialogue”.

Take Back Trinity was a student movement that emerged in March in the face of the introduction of a €450 flat fee for sitting supplemental exams.

Students, as part of the protest, occupied the Dining Hall for three days, with over 50 students set up camp inside the building to protest the introduction of the fee.

The protests received national media attention, with the College coming under particular scrutiny for moving against the students occupying the Dining Hall, locking the doors and refusing access to the building to members of the campaign. Private security guards took the lead, with students initially blocked from bathrooms and prevented from entering or leaving the building freely.

The Take Back Trinity campaign had three main demands: a full reversal of the decision to introduce supplemental exam fees, that there is a freeze on postgraduate and non-EU student fees and that there is no increase to on-campus accommodation prices.

Just weeks after announcing the introduction of the fee, Trinity was forced to commit to scrapping it, in an episode widely viewed as an embarrassing climbdown for Prendergast. The College also agreed to introduce fee certainty for international undergraduate students and postgraduate students in the aftermath of the protests.

Earlier this month, The University Times reported that the president of the Graduate Students’ Union (GSU) has been granted full membership of the College’s Finance Committee, after years of sitting as a non-voting member.

Speaking to The University Times, GSU President Oisín Vince Coulter called the change “an important, if not massively significant, step”.