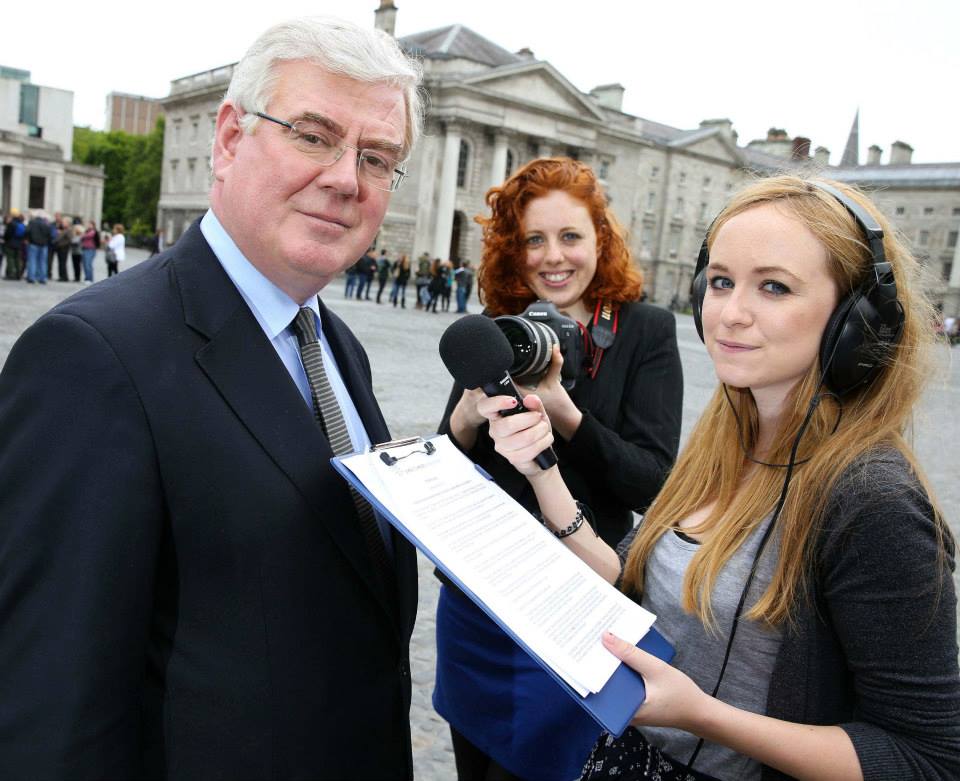 Sally Hayden won a spot on the Simon Cumbers student scheme in 2013.

It’s fair to say that many of us are just blindly making our way through College, not really sure where our degree might take us or if we are in fact, doomed to certain non-employability (shout-out to my fellow arts students). Most certainly, few of us anticipate that we might become pioneers in our field or be named amongst some of the most influential millennials in Europe for our work. Trinity graduate Sally Hayden, the unassuming 29-year-old who was named foreign correspondent of the year at the Newsbrand Ireland journalism awards at the end of last year and is also one of seven Irish people to be included in Forbes’s European 30 Under 30 list this year, has managed to do exactly that.

Having studied law in University College Dublin (UCD) as an undergraduate, and completing a masters in international politics in Trinity in 2013, it seems that Hayden kept up her interest in journalism as but a wistful fancy, a productive hobby sustained only in the background. Yet, in the space of five years Hayden has managed to catapult her way through the notoriously impermeable world of journalism to cast a light on some of the most destructive crises of our age, sharing stories from Malawi, to Syria and most recently, Libya.

Speaking to her over the phone from her London sublet, her quiet, kind voice hardly fit into the hardcore image of an award-winning, critically acclaimed journalist that I had built up in my mind. Yet she indulged me in my somewhat fanatic questioning, and her candid responses did not disappoint.

Hayden took off on her journalistic endeavours back in her glory days of Transition Year when, in 2006, she won a competition with the Irish Star, gaining her access to a lavish week’s work experience with the paper. From there, it seems that her passion for journalism only flourished as she got involved with her university paper (which included a momentous, and certainly enviable interview with Rizzle Kicks), alongside a myriad of internships with the likes of the BBC and the Santa Barbara Independent. While Hayden enthusiastically filled out an impressive CV of journalistic experience, she remained focused on her law degree and the kind of career options, namely in humanitarian law, that it might offer. “I didn’t know any journalists and I didn’t know how to get into it – it didn’t seem like something I could aspire to do”, Hayden explained.

When Hayden casually applied for the Simon Cumbers Media Fund in 2013, she could not have foreseen the astonishing impact her success with the organisation would have on her career. The organisation was set up in memory of Irish journalist Simon Cumbers to endorse improved Irish coverage of social justice issues around the world – winners receive funding for a trip to cover a story reporting on global development issues.

Hayden admits that she was “clueless” making her way over to Malawi as a first-time journalist to report on he state of gender equality under the country’s first female president Joyce Banda (elected a year earlier). Nevertheless, she immersed herself in the life and politics of Malawi during her six-week stay, becoming friends with the country’s top hip-hop artist and even going for lunch with a presidential candidate.

During her stay, a major corruption scandal broke and an assassination was attempted, confronting Hayden with the startling, volatile reality of the world of politics. This unexpected turn of events revealed to Hayden an understanding which she now sees as integral to her passion for journalism, “I realised how much inaccurate information was being shared around about what was going on”. Having seen first-hand the value of, and the need for accurate, precise reporting, Hayden found herself “kind of hooked after that”.

At the same time however, Hayden readily acknowledges the turbulent and uncertain era into which journalism has entered. While many have declared it a “dying profession”, Hayden had a refreshingly optimistic take on what lies ahead for the world of journalism. She shared her belief that “it will morph”, but that that this is dependent upon readers and viewers recognising “that this is something that is really needed for the health of society”.

Her work with Simon Cumbers helped gain her entry into the world of CNN, where she completed an internship at Christiane Amanpour’s nightly news programme. From there, Hayden went on to become the chief staff writer at Vice News in the UK for two years before becoming a freelance journalist and enjoying success with not only the Irish Times, but also the Washington Post, the Financial Times, Marie Claire, the New York Times, and the Guardian, to name but a few.

Rightfully, Hayden’s groundbreaking humanitarian reporting has received global adulation, most recently in Forbes’s prestigious 30 under 30 list. In an email to The University Times, Hayden admitted that “it’s amazing to have [her] work recognised internationally”, hopeful that the acknowledgment might lend support to her writing prospects. In fact, coming off the back of her 30 under 30 recognition, a literary agent has been in touch with the journalist about a possible book idea, pointing towards a productive and fruitful career ahead.

Naturally, many burgeoning Irish journalists now look to Hayden as a pioneering force in journalism. Sharing some words of wisdom, Hayden advised: “Be humble. Be conscious of all the things that you don’t know.” Over the years, Hayden explained, from her time in Malawi and her trips to Calais Refugee Camp, and of course her most recent contact with Libyan refugees, she has been forced to understand that each political and cultural conflict is complex and has its own nuances – individualities are there for a journalist to learn and be informed by, not to be overlooked or underestimated.

Hayden was also eager to reassure those students burdened by the demands of a part-time job alongside those of college. Upholding the “every cloud” philosophy, Hayden assured those students that her manifold jobs in the service industry have made her “more aware of the different types of human behaviour towards different people in different kinds of power structures”. So on Saturday, as you traipse through your eight-hour shift, remember: you might be a better journalist for it.