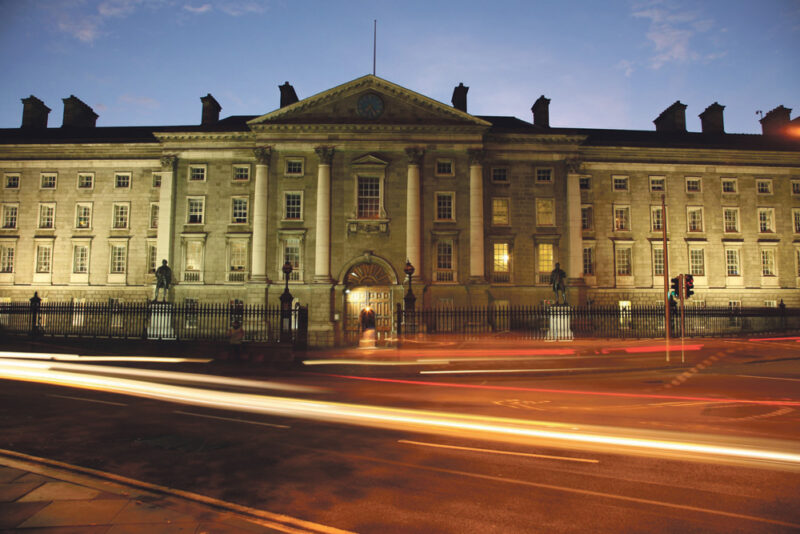 When Trinity launched its admissions feasibility study it hoped to provoke a debate about the way we admit students to third-level, what is fair, and whether it might be possible to do things in a better way.  A central part of the study was to see how people would react to change – if a holistic system could have the same level of public confidence as the dreaded ‘points system’, which is respected as much as it is detested.  This week we certainly got our debate, when the former general manager of the CAO (he retired back in 2004) launched as astonishing and intemperate attack on our study in the pages of the Irish Times.  Perhaps such an insular and suspicious response was inevitable, given that he had dedicated his life to administering a system that very few people have kind words to say about.  Of course, by attacking the study, the author of the article has now become a crucial part of it, as we evaluate public reaction to his criticism.  I suspect he will not appreciate the irony.

The headline chosen by the Irish Times crossed the line.

The truth is that the CAO has been our partners in this exciting project from the beginning.  At the launch of the study the current general manager of the CAO, Ivor Gleeson, described it as ‘a project of national significance’, and noted that ‘The new admissions route being tested in this feasibility study has the potential to bring about a significant change to the system of third-level admissions in Ireland [for the first time] in over thirty years’.

The reason I feel compelled to address the issue in The University Times is because the headline chosen by the Irish Times (referring to ‘guinea pigs’) was a cheap shot at the 25 students we have admitted through our new admissions route, and crossed the line.  An attack on one of us is an attack on all of us.

The new admissions route being tested in this feasibility study has the potential to bring about a significant change to the system of third-level admissions in Ireland [for the first time] in over thirty years.

Far from being guinea pigs undeserving of their places, these are enthusiastic and able students, excited by learning and by the opportunities before them, with ability and potential that goes beyond a narrow points total, and we are very proud to have them in Trinity.  They were selected in a completely anonymous process after a rigorous and exhaustive process, chaired by an independent retired judge (Dr. Yvonne Murphy), and which was monitored by leading experts and observers.  Three scales were used to evaluate the applicants – their Leaving Certificate results; their performance in the Leaving Certificate compared to others in their school (the Relative Performance Rank); and an anonymous personal statement – and it was a robust process that withstood external scrutiny.

But the key point is that they were admitted as part of a feasibility study to test if there was a fairer and better mechanism to admit students to third-level rather than just relying on points alone.  We are trying to see – on a small-scale and in a strictly controlled way – if things that work well in an international context (and Harvard and other leading universities advised on the development of the study) might also work in Ireland.  What is the point in being Ireland’s leading university if we are not prepared to lead on educational issues, especially when the current system has so many flaws and the issue affects so many people?

What is the point in being Ireland’s leading university if we are not prepared to lead on educational issues, especially when the current system has so many flaws?

As the Minister for Education, Jan O’Sullivan, said in her interview with The University Times on 21 September, it is right that we do this work, and we have been encouraged by the support we have received from the Department of Education and Skills, from our own students and alumni, and from members of the general public.  In a way, Trinity is the only university in the country that could do this work.  It is precisely because our courses have such high demand, and going to Trinity has such great prestige, that we have the moral authority to lead on this issue.  We also have a moral responsibility.

Rather than cursing the flaws in the current points system, Trinity is attempting to provide some light on one of the most controversial parts of Irish higher education.  We do not claim to have solved the problem of the points race, but we stand over the decision to attempt to solve it, rather than sitting back and accepting the status quo purely because that is the way it has always been.  Lots of people are afraid of change, and fear can be used to stop progress, and smother innovation.   Whatever the results of this study we should be proud of Trinity for having had the courage of its beliefs and for leading on this subject rather than cowering in the shadows.

Patrick Geoghegan is the former Senior Lecturer and Dean of Undergraduate Studies and helped develop the admissions feasibility study.