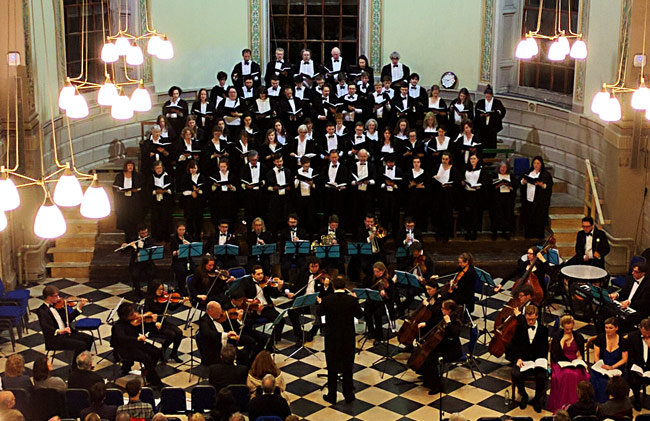 Choral Society, a largely student-run choir, have performed the likes of Carmina Burana and Verdi’s Requiem to great acclaim in recent years, but fell a little short this week with Mendelssohn’s Elijah.

Whilst Choral’s traditionally good and pronounced sound was ever-present during Thursday’s performance in Trinity’s Public Theatre, there was a sense that they were under-practiced – something which contrasted with the five superb soloist choices, a grouping which, alone, made the evening well worth the price of a €10 student ticket.

In particular, tenor Stuart Kinsella and alto Laura Lamph – both internationally renowned soloists – brought something exceptional to the evening. From early on, Kinsella’s “Ye People, Rend Your Hearts” set him apart as a singer who could both impose on the audience and be thrilling at the same time. The air of Lamph’s “Woe Unto Them” was easily one of the most impressive features of the night’s performance.

Elijah, an oratorio written by German composer Felix Mendelssohn, originally premiered in 1846 at the Birmingham Triennial Musical Festival, and was regularly performed by Choral in the 1960s and 1970s. For whatever reason, it fell out of popularity, and 1977 saw the last performance of it in Trinity. Forty years later, as part of the final concerts of their 179th session, Choral sought to reintroduce the “beautiful and dramatic” work over two nights. The combination of performers in academic dress and the College’s stunning Public Theatre was always going to be magnificent, but overall, the society failed to reach the heights that it is known for.

There were two running threads: when a section sang alone, the cracks showed, and when the chorus united and pulled out the stops, we got a glimpse of Choral’s formidable reputation. When the oratorio required the sopranos to take a few lines on their own, it was strained, and when parts of the performance needed intensity and sentiment, such as when “thousands languish” or “perish”, they lacked emotion. The basses consistently outperformed all of the other sections, booming voices which allowed a pouncing on the ears.

Moments in the second half, such as the full chorus singing “Behold, God the Lord passed by”, were highlights – again, something that allowed us to catch sight of the promise of the oldest university choral society in the UK and Ireland. The unison of the chorus and the quartet of soloists in the penultimate “But the Lord” was in every sense outstanding.

Largely, the orchestral accompaniment seemed on point, aside from a few dicey staccato movements and what seemed like disjointed conducting from director David Leigh.

With only nine weeks of rehearsals, the performance from the student-run choir was still impressive. The setting in the grounds of the university means that every student and staff member should make their way to a Choral concert – deliberately, and often. Yet, we’ve come to expect something world class from this grouping over the past two centuries. It is, after all, Dublin University’s Choral Society. This week’s performances left a little to be desired, the audience wanting to hear the acclaimed sound that in the past has taken them to the likes of the National Concert Hall.