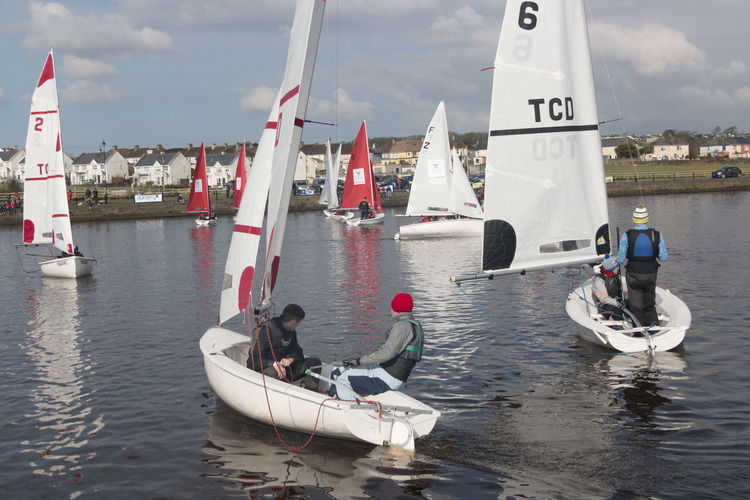 With one of their best results of recent years, Trinity Sailing Club took home an overall second place at the 2016 Irish University Sailing Association (IUSA) Varsities held in Kilrush, County Clare. The event, co-hosted by Trinity and DIT, comprised three days of racing from Thursday, February 25th through Saturday, February 27th. Kilrush Creek offered excellent sheltered conditions for racing close to the shore, which proved ideal spots for changeovers for the competitors and for the assembled spectators on the Clare coastline. After the three days of racing, Trinity took second overall, second in the Gold Fleet final, joint third in the Silver Class, and brought home three awards at the end-of-event awards ball.

Trinity Sailing were well represented among the event’s 27 teams from 11 universities, from both Ireland and Britain. Alongside Trinity, who fielded seven teams, UCD, DIT, DCU, Queens, CIT, UCC, NUIG, the University of Edinburgh and Loughborough University from England were all represented. In addition, the Scottish University Sailing Association (SUSA) sent a representative team to compete.

The first day of action on Thursday was comprised of group stages, which streamed teams into gold, silver and bronze fleets for a round robin competition on Friday and knockout stages on Saturday. Day one saw the opening four round robins and it was UCC 1, Loughborough University, CIT and UCD 1 who came out on top at the end of the day’s proceedings. The quarterfinals were witness to intense racing and saw Trinity inflict the first defeat on reigning champions UCC 1. TCD 1 then proceeded to the semifinals where they took on and bested Loughborough University. In the other semifinal, an intra-university race between UCD 1 and UCD 2 was won by the former, setting up an interesting colours final between the two first-teams from Dublin in a best-of-five final.

The showdown in the Gold Fleet final saw TCD 1 and UCD 1 compete for the colours varsity in the most high profile event of the weekend. Trinity took victory in the first race but it was UCD who triumphed in the next three, taking advantage of changing weather conditions. With the wind dropping, UCD 1 outperformed TCD 1 in the lighter wind conditions and the Trinity team had to settle for second ahead of UCD 2.

Trinity Sailing went on to take home top-three results in both the Gold and Silver fleets. The TCD 6 team finished the event in joint third place in the Silver Fleet with DIT, just behind CIT and UCD 3.Overall, Trinity Sailing took second place at the varsities, which is one of the club’s best results at the event in recent years. The final day culminated with an awards ball, where Trinity First’s member Scott Flanigan won the IUSA Sailor of the Year award. Flanigan adds this to an impressive resume which already includes representing Ireland at the 2012 London Olympics. The IUSA Fresher of the Year went to Trinity member Mark Bolger, while Trinity and DIT received the award for Event of the Year for their hosting of the varsities, thus capping off a successful weekend for Trinity Sailing Club.