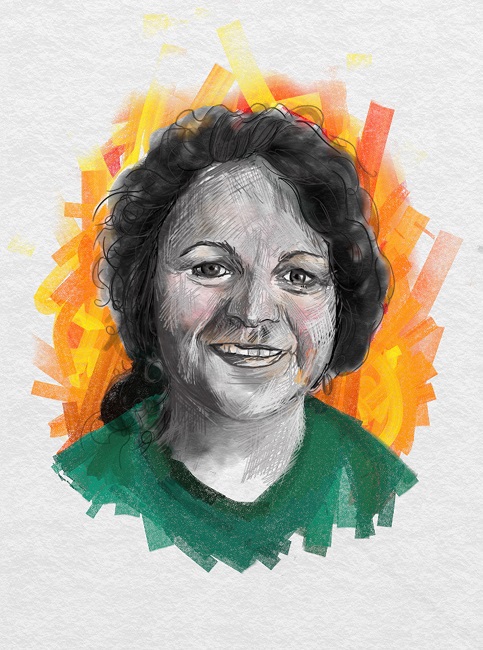 Laura Finnegan for The University Times

In 2012, Trinity opened the Loyola Institute, an entity devoted to the teaching and research of Catholic theology within the School of Religions, Peace Studies and Theology. Professor Siobhan Garrigan is not necessarily whom one would expect to be the director of such an institute.

Born in Liverpool to an Irish mother and an English/Irish father, Garrigan was the first from her school to attend either Oxford or Cambridge, having been accepted to Oxford and completing an undergraduate degree in theology. Her university experience, however, was very damaging. Speaking to The University Times, Garrigan explains: “They thought I was thick in Oxford, and I realised that I was subject to other people’s prejudices. At the time I thought the problem was a lack in me, but now I realise that it was systemic, ethnic discrimination in England against Irish people in the 80s. I left Oxford thinking I would never go near a university again.”

Fortunately for the Loyola Institute, this was not to be the case, though her journey from undergraduate student to the Chair of Catholic Theology certainly did not follow the conventional path. After completing her degree, Garrigan began working with homeless people in a number of shelters in London. From there, she received a scholarship, known as an “ecumenical fellowship”, to go work in New York City at the Union Theological Seminary in the area of social justice. Garrigan says: “I applied for that and was astounded to get it. They saw what I was doing as a ministry, while I simply thought: ‘I just work in a shelter’. But that’s a ministry. We all have potential ministries.”

I simply thought: ‘I just work in a shelter’. But that’s a ministry. We all have potential ministries

As she recounts the years working with the homeless, and then with the Emmaus community, it becomes clear that it was during those years that Garrigan regained the confidence she lost while at Oxford, and tentatively began speaking about theology again. After speaking on the radio about the Emmaus community, she was put in contact with the novelist John O’Donoghue, who asked her to speak to his class in the Galway-Mayo Institute of Technology. As he went on to pursue other projects, he left Garrigan with his class full-time. She started her PhD by distance learning and maintains that everything up until this point, she was still very tentative about going into academia: “I would tell myself, ‘Just another month, just until Christmas. No commitment, I’m just dipping my toe in the water,’ and then things took off!”

Yale University in the US were then looking for someone who was both a theological scholar and who could help them with their ecumenical worship programme, and Garrigan was just that. “Ever since I was a teenager I was involved in ecumenical work through playing music for worship, and that continued everywhere I’ve ever worked”, she explains. “By the time I got to Galway, I was pretty good at organising ecumenical services, without ever having been trained, through 15 years of practice.” She stayed in Yale for eight years, then moved to lecture in the theology department in Exeter University for two and a half years before her arrival in Trinity.

In her role as the Chair of Catholic Theology, and the Director of the Loyola Institute, Garrigan has made it clear that under her leadership all aspects of theology, and its place in our society, will be explored: “If all we get is the media idea that it is endless popes and misogyny, we never actually get to read what’s in the tradition, and its complexity and variedness and richness. It’s a very unexplored tradition in these cultures. For people unfamiliar with the field, or who don’t know what theology as an academic subject is, they would expect my position to be much more conservative and preachy.”

Reverend Julian Hamilton, Methodist Chaplain to the College, speaks very highly of Garrigan: “As a chaplain, I get to hear a lot from students about their lecturers, and it’s really telling that I only ever hear positive things about Siobhán.” He believes that Garrigan’s wish to delve into a side of theology that perhaps isn’t as widely explored is truly enriching the learning experiences for students of the Loyola Institute. He adds: “The quality of teaching in Loyola is excellent, and certainly not conservative or right wing. Siobhán is of course a wonderful example of theological reflection in a post-Christian West. Her commitment to fully engaging ‘the other’ is exactly the kind of theological education we need.”

Garrigan’s passion is setting Catholic theology in the service of social justice, and she believes that her love of that is part of the reason she holds her position. “I’ve done quite a bit of work on poverty and homelessness, not just on an abstract level but through charities and NGOs”, Garrigan explains. “I think that work, which isn’t strictly academic, was attractive to my employers, because it showed that I was in the habit of making the bridge between academic life and the lives that the people all around us are leading, and that from an academic position I could engage our students in reflection on real life situations, in all their difficulties, such as the refugee situation, terrorism, the housing crisis, poverty, drug use – so many crippling and disruptive things, that sit alongside the seemingly privileged life of a university, but are really what a university exists to address and hopefully help resolve.”

The emphasis on social justice in relation to Catholic theology is something that other members of staff in the Loyola Institute are interested in as well. Dr Fáinche Ryan, Assistant Professor in Systematic Theology, says: “This whole notion of social justice, we have another word for it in theology, or it would be akin to what we call ‘liberation theology’, which was very alive in Latin America, and that’s really all about changing society. When Professor Garrigan came along it was made quite clear that that’s what we were about here.”

Garrigan is also trying to allow undergraduate students to apply their theoretical knowledge to real life situations by developing a placement programme for them. Dr Cornelius Casey, Associate Director of the Loyola Institute, explains how this will work: “Siobhán is developing a module in the undergraduate curriculum, which will allow students to have placements with certain agencies and work with homeless people, and carry that back into a kind of reflective transcript, which will be assessed in an academic way afterwards. There has been a lot of interest shown in this, and it shows that what Siobhán does is enriching what we’re trying to do.”

Garrigan believes that this placement programme will, in a way, repay the trust that Trinity has given her, by showing innovation within the school: “I want to integrate immersion experiences into my undergraduate modules, so that students get to theologically reflect on the experience of working, for example in a needle exchange, or a trafficking advocacy group, or an anti-poverty agency, as well as reading about those issues, to bring the two together so they don’t have to do this at different stages in their life, and while they’re still in university to learn to integrate and think critically and reflect theologically.” She wishes to continue this at postgraduate level too, and says that there has been “a lot of interest in studying theology in this way, with such a concentration on social justice”.

Following on from her work incorporating music into theology, Garrigan is also placing a strong emphasis on theology in the arts. “We recently had an artist-in-residence in with us,” explains Casey, “a poet from the States called Martha Serpas, and there was a wonderful series of poetry readings and discussing how poetry makes theology visible in a different sort of way”. “She stayed for a week,” continues Ryan, “and gave a number of poetry readings around Dublin and met with a lot of different groups, and has actually written a poem about our institute”. According to Garrigan, “the arts are a very important resource to see where the theological themes are alive, or tending towards destructiveness, which of course they sometimes do”.

The Loyola Institute itself is relatively young, with its first students only in their Junior Sophister year. But it is evident that, under the leadership of Professor Garrigan, these students will be studying in a unique way. Garrigan brings the practical experience of theology into the theoretical study of it, making the Catholic Theology department in the Loyola Institute exceptional in its capacity to merge the real world with the microcosm that is Trinity.