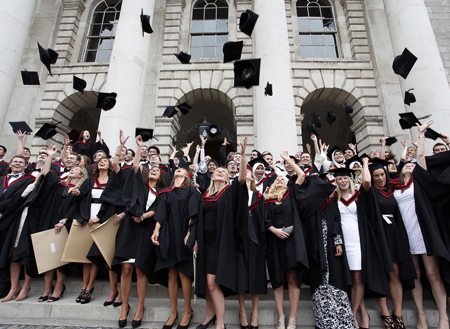 For every Irish student, the CAO represents a confusing and mildly terrifying set of choices, determining the rest of your life. “What’s your first choice?” was the refrain of sixth year as we all struggled to fit our futures into a ten-point list. Some of us based it on course preference, others on college, some on what they thought was a realistic estimate of their Leaving Cert results. All of us made a forced-choice, hopeful stab in the dark as to what would be an interesting career, often having never studied any of the material we would encounter for the next few years or spent a day shadowing someone in our future field. As idealistic eighteen-year-olds, we were on a path to the rest of our lives. But were we too young to decide something as momentous as that?

Ireland’s system of choosing a specific field at undergraduate level is not unique. In the UK, they choose far earlier, with their two or three A-Levels chosen at the age of fifteen. While the Leaving Cert may limit you somewhat, a minimum of six subjects is far less restrictive than two. English students often enter a single honours degree programme at the age of seventeen or eighteen, earlier than Irish students who normally take Transition year and so start college later. However.in the United States it’s far more typical for students to enter four or five-year liberal arts degrees, only specialising as graduates. They don’t pick a career straight out of school, but instead choose a major, while still taking general education courses in a variety of other subjects.

Graduating with hundreds of thousands of dollars in debt, it’s fair enough that US students want to be sure their liberal arts degree won’t be a dead weight on their shoulders as they try to find a job.

It sounds enjoyable: spend four years studying a diverse range of subjects, majoring in what you enjoy most, and then deciding upon graduation if you want to try your hand at a more vocational field, like medicine or law. But the amount of students entering liberal arts programmes has been shrinking in the US, as students veer more towards business or practical, industry-related degrees that they hope will get them jobs. Graduating with hundreds of thousands of dollars in debt, it’s fair enough that US students want to be sure their liberal arts degree won’t be a dead weight on their shoulders as they try to find a job.

But the American system may guarantee that students have more maturity and greater life experience when they choose their specific career path, often at the age of 22 or above. More success in later life could be the consequence of this. Graduate doctors may do better than undergraduates, according to research by the Royal College of Surgeons in Ireland (RCSI). Despite pressure on students in Ireland to go directly into medicine at the age of eighteen – with high numbers repeating the Leaving Cert in order to get directly into medicine – people who enter RCSI’s graduate entry course do just as well or even more so, though they study over four years instead of five or six and graduates who come from non-science courses are just as successful as those with science degrees.

Maturity and diversity of background are cited as the main reasons why graduates do better in medicine – and this likely extends to other fields too. In law, many practicing lawyers argue that coming to a masters with an unrelated undergraduate degree under your belt can often mean you approach the field with more diverse knowledge and a better way of looking at the law. It makes sense: much of the actual practice of law is about the critical reading of information and the analysis of the law – skills which can be honed in English or history or even unrelated fields.

Giving students the opportunity to test out a variety of subjects, as in a US liberal arts programme, before specialising at graduate level is just not financially feasible for many students.

But while graduates may be just as successful, the financial sacrifice required to fund someone through both an undergraduate and graduate programme is crushing. In Ireland, four years of a bachelors adds up to around €12,000 in student contribution charges, to say nothing of the costs of rent, food, travel and student life. One year of a master’s programme can be around €10,000. Giving students the opportunity to test out a variety of subjects, as in a US liberal arts programme, before specialising at graduate level is just not financially feasible for many students, and a three, four or five-year degree after the Leaving Cert may be the only cost-effective way to manage the price of education both here and abroad.

A US-style setup is attractive but expensive. No Irish student wants to take on the financial noose that is the model of education there. Though entering college at such a young age may mean students do change their career path upon graduation – as many of us fourth years are seeing right now – at least they’re prepared to opt for the monetary sacrifice then. Better to spend €12,000 on four years and then change your field, than to pour thousands of dollars into a liberal arts programme that may lend you only “just as much or even more” success. Choosing at eighteen may lend us more professional anguish at twenty-two when we aren’t sure if we chose the right degree, but at least we aren’t crippled by debt as we decide.