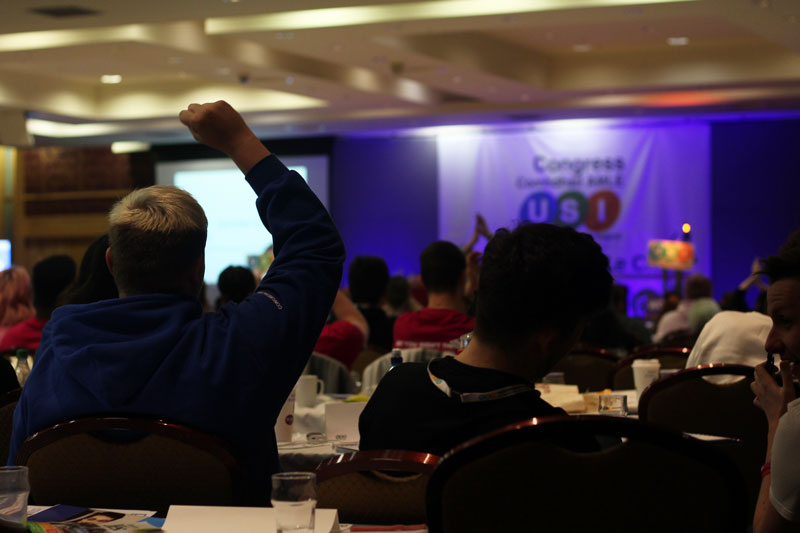 The Union of Students in Ireland (USI) voted today at its annual congress to support a boycott, divestment and sanctions campaign against Israel.

Student organisations have increasingly moved to support the campaign, even if not every students’ union in Ireland is mandated to support action against Israel.

The motion today was pitched with calls for students to be on the right side of history, a cry that was greeted with a standing ovation from the audience. The motion was brought by Queen’s University Belfast Students’ Union (QUBSU) and needed a two-thirds majority to pass.

Speaking in favour of the motion, Vice-President for Academic Affairs of USI Oisín Hassan said: “We are not talking about institutions like our own.”

“We are talking about institutions that are supporting” the military occupation of Palestine, he said.

USI is now mandated to lobby universities to divest from and “terminate any contracts with companies that are complicit in the occupation of the Palestinian territories and violation of Palestinian human rights more wisely”. The union will also “support an Academic Boycott of Israeli Higher Education Institutions complicit in normalising, providing intellectual cover for, and supporting settler-colonialism”.

Trinity College Dublin Students’ Union (TCDSU) is mandated to support a boycott, divestment and sanctions campaign, after a referendum on the issue passed last month. The issue was pushed to the centre of campus politics over the last year by Students for Justice in Palestine.

At congress today, President of Dublin Institute of Technology Students’ Union (DITSU) Boni Odoemene suggested that support for boycott, divestment and sanctions might be anti-semitic and could draw accusations of “neo-Nazism”.

There was heavy Trinity support for the motion.

TCDSU President Kevin Keane spoke today in support of the motion. As President-elect, Keane attracted heavy criticism from student activists after speaking against a motion calling for a boycott campaign at the union’s council, despite offering support during his presidential campaign. At congress, he said: “I spoke against it because I wasn’t brave.”

The Graduate Students’ Union (GSU) President-elect, Oisín Vince Coulter, told the audience: “Students have opposed oppression for decades and we have stood on the right side of history.”