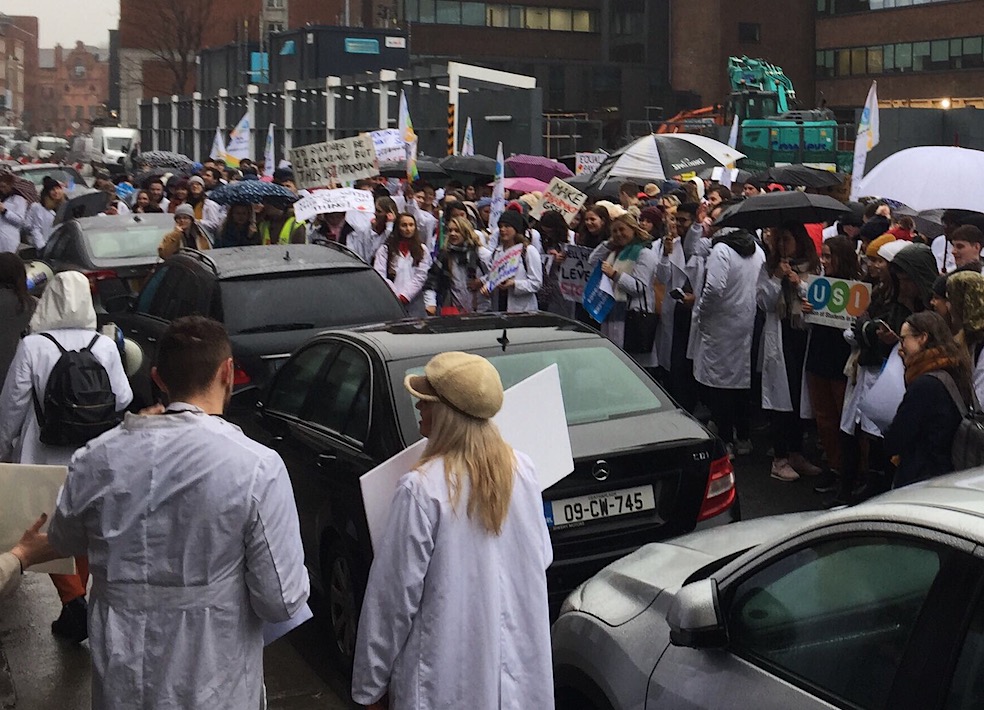 The fate of unpaid pharmacy placements remains unclear, after the Pharmacy Society of Ireland (PSI) declined to offer support for paid placements in spite of a march by hundreds of students from all over the country from the Dáil to the offices of the PSI this morning.

Niamh Loughlin, a Trinity student and the President of the Irish Pharmaceutical Students Association – which organised the march alongside the Union of Students in Ireland (USI) – told The University Times that “there was no clear answer to what we were asking for” after a meeting with officials from the PSI this morning.

“We wanted support for paid placements and we wanted them to clarify that to students”, she said, following a march that was attended by over 400 pharmacy students from University College Cork (UCC), Trinity and the Royal College of Surgeons in Ireland (RCSI).

The rally began outside the Dáil at 10am before proceeding to Fenian St, where a large crowd of boisterous students, clad in white lab coats, chanted “pharmacy education, not exploitation”. A meeting was held in the Royal Irish Academy to launch the pharmacy students’ campaign report at 9am.

Three busloads of UCC students attended the march, after departing Cork at 4am.

Speaking to The University Times, USI Vice President for Academic Affairs Oisín Hassan – who was also in the meeting with the PSI – said: “All they’ve said is ‘there’s no issue’. And we’re like, ‘there is an issue’. And what we need from them now is to look at the report and a significant review needs to happen.”

Hassan said the PSI registrar, Niall Byrne, wasn’t at the meeting: “I think we need to meet with him. We need to get IPSA and everybody into the room, get the schools into the room. Get pharmacists into the room in the profession. And then obviously the legislation is a big one with government and with Dáil Eireann.”

Yesterday, an email sent to pharmacy students said the Pharmacy Association of Ireland had ruled that placements can be “either paid or unpaid”. Previous changes to the MPharm Programme stipulated that students should perform 12 months of unpaid placement.

Under the new MPharm Programme, students will pay fees of €8,500 fees for fifth year.

The email said that the heads of school of the country’s three pharmacy courses “agreed that, in light of the clarification, placements in the future may either be paid or unpaid”.

Reporting from The University Times previously revealed that the programme was putting “huge financial strain” on students.

A petition against the programme, which the students planned to submit to the Pharmacy Association of Ireland, has over 6,000 signatures.