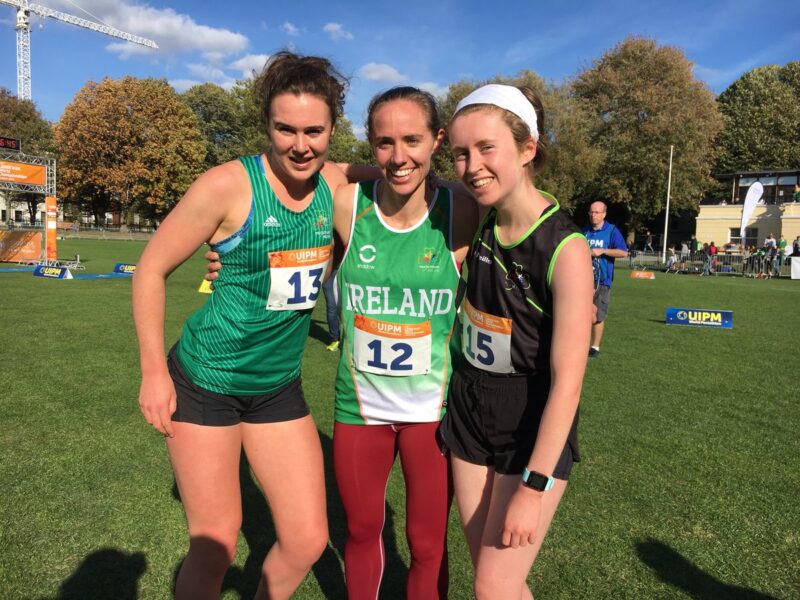 Grace Culhane (right) in action at the 2018 Laser Run Championships in Trinity.

Representing Ireland in the Laser Run Championship in 2018 it’s no surprise that Culhane finds herself with a jam-packed schedule, which involves training twice a day, six days a week. At the moment, a typical week consists of four runs, four swimming sessions, a gym session, a fencing session and a horse-riding session. Culhane explains that a typical day for her features an early morning training session followed by going into college to do her coursework with yet another training session again in the evening. Culhane even has plans to squeeze in more training for the pentathlon with the aim of training up to three times a day as the season progresses.

As if this wasn’t enough to keep her busy, Culhane has also been appointed to the role of inclusion officer for Dublin University Harriers and Athletic Club (DUHAC) for the 2021/22 season. The inclusion officer role is a new one whose duty involves ensuring that people of all backgrounds and all abilities can participate in the club.

Culhane has proposed the introduction of a para-athletic intervarsities: a competition which would see the best parathletes in the country face off against one another on a regular basis. Such a competition does not exist currently. “There’s nothing set in stone at the moment but I’m in contact with people at the IUAA [Irish Universities Athletic Association] to try and see what we can do to, first of all, implement more para athletics training and coaching and awareness in not only DUHAC but in all the athletic clubs in the country because that would help para-athletes flourish at university level.”

Culhane has proposed the introduction of a para-athletic intervarsities: a competition which would see the best parathletes in the country face off against one another

“We [Ireland] did so well at the Paralympics and having a stronger grassroots foundation would help us further”, she says. Indeed, Ireland’s success at the paralympic games in Tokyo earlier this year extended into the College community with Trinity student John Tanguay claiming a silver medal in rowing for Team USA in the Paralympic Games.

Culhane is frank about the importance of meaningful change: “Having competitions in place is a priority … it’s all well and good having people with disabilities in the club, but if you don’t give them something to train for, you’re really just having them there as optics.”

“Just because they may have a disability doesn’t mean that they’re just there to show up”, she explains. “If I had a disability, I wouldn’t want to be just there to train. I’d want to compete and I’d want to properly be in the club – and the way to really get involved with the club is by going to competitions and being able to showcase your training and the work you’ve put in.”

Speaking about the significance of organising such events, Culhane goes on to note: “Having those competitions in place would be a really good kickstarter in terms of getting more parathletes involved.”

It’s all well and good having people with disabilities in the club, but if you don’t give them something to train for, you’re really just having them there as optics

In spite of her packed schedule, Culhane is enjoying training at the moment, having taken a break at the end of last season to recuperate for the year ahead. “At the moment, it’s a lot more swimming and running to build up an aerobic base … and then gradually adding in more technical sports like fencing and horse riding. As the year goes on I’d like to do another fencing session and another horse riding session and maybe another gym session on top of that.”

Just how does she manage to stay organised balancing her training, her role in DUHAC and of course studying for her degree in BESS? “It’s just about managing your time and making sure you’re adding everything gradually and not rushing into anything all of a sudden. The main competition for me wouldn’t be until the summer anyway so there’s no massive rush to get back at everything straight away.”

Earlier this year, DUHAC competed in the national cross-country championships. Overall, Trinity finished in second place – they were pipped to first place by the University of Limerick but finished ahead of local rivals Dublin City University. The DUHAC women’s team did particularly well, winning the gold medal for the second year in a row. But it was the sheer turnout of Trinity students that was most impressive: 12 of the 30 competitors in the female race were Trinity students, while 18 of the 54 male participants were also Trinity students.

Culhane believes this is down to the culture that the DUHAC has cultivated: “The club itself has got a really good ethos … with intervarsities clubs generally, what you find is that you either have really elite squads like DCU, which is like a sports scholar academy, which is quite intense … then you have other athletic clubs that just find it hard to get people involved because there’s not that support system there.”

She goes on to reinforce the importance of the culture created in the club stating: “I think we’ve struck a good balance between being inclusive to people who maybe haven’t run as often… [but] we still have really really high-level runners … it’s about finding that sweet spot in between. There’s people who ran in cross-country two weeks ago who didn’t even want to compete before…due to the encouragement and the support of the team they felt compelled to give it a go.”

Trinity last won the team event in 2002. DCU won it in 2003 and have won it every single year since. UL finally broke their dominance this year with Trinity coming in at second overall for the second year in a row. Can they go all the way next year and win their first team medal since 2002?

Culhane strikes an optimistic tone, full of hope. “It’s just a case of getting a couple of months of consistent training as a group…having a good couple of months with actual group training will bring everyone along. Obviously, with Covid we didn’t have that opportunity to train as a group and I think training in a group really elevates people’s performances.”