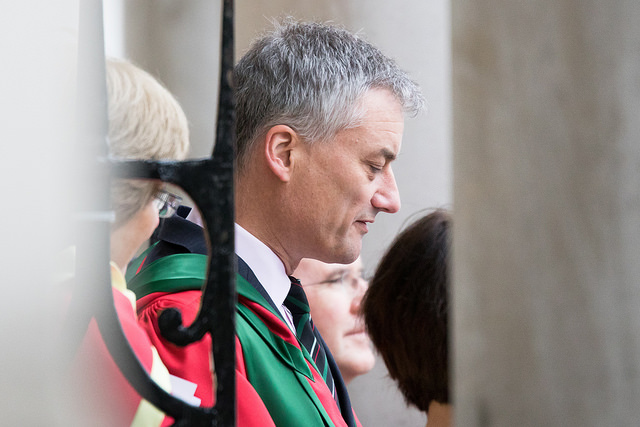 The funding crisis loomed large as Provost Patrick Prendergast addressed college at the midpoint of his term this afternoon. In discussing the funding challenges faced by the university, Prendergast highlighted the strategies the university has introduced to adapt to the changing higher education landscape in Ireland.

Since Prendergast took office in 2011, Trinity has fallen dramatically in world university rankings and has seen a considerable drop in state funding, something he expects to continue over his remaining five years in office.

“The decrease in state funding was our groundhog day”, Prendergast said. Describing the atmosphere in higher education at the time of his first address in 2011, Prendergast said: “We were then three years into austerity. We were alarmed by the way things were going, we wanted the government to take note.”

Five years later, questions over funding remain. The publication of a report in July by government’s higher education funding working group, commonly referred to as the Cassells report, set out three options for the funding of the higher education sector. The group put forward three recommendations for the funding of higher education – the abolition of the student contribution and the creation of a predominantly state-funded system, the continuation of the current student contribution charge coupled with increased state investment, and the introduction of an income-contingent loan system.

Government funding is not a decision that we have direct control over. It’s ultimately a nettle that they have to grasp

Prendergast did not express a preference for any one of the options in his speech. However, describing the need for a decision from the government on the funding of higher education, he said: “Government funding is not a decision that we have direct control over. It’s ultimately a nettle that they have to grasp.”

Prendergast referenced the decline in fortunes of Irish higher education institutions since 2011, which have experienced significant falls in world rankings since then. Following the publication of the QS rankings, in which Trinity fell to 98th and University College Dublin (UCD) fell to 176th, Prendergast and the President of UCD, Andrew Deeks, in a joint statement called on the government and political parties to make a decision on higher education funding: “The political system must now make the difficult choices that are needed to improve the funding given to universities and in the manner in which this funding is distributed.”

The Cassells report is currently being considered by the Oireachtas Education and Skills Committee, with the government’s Action Plan for Education outlining the second quarter of 2017 as the deadline for when a decision on a new funding model should be made.

While Prendergast, alongside the heads of the other six Irish universities, will appear before the committee in November, to discuss the options put forward by the report, much of the talk was more long-term in focus. “The funding situation from the government hasn’t changed much, but we got creative, and now so much else has changed”, he said. Warning the audience, the majority of whom were Trinity academics, that the universities that will “survive and emerge strengthened are those that act with foresight, pragmatism and ambition”, Prendergast pointed to the university’s efforts to become “increasingly financially independent”.

“We’ve not been caught napping”, he said.

Over 50 per cent of Trinity’s funding now comes from non-exchequer sources, and the university has sought in recent years to raise funding in a variety of new ways. This has included an increasing emphasis on commercialisation and on promoting Trinity as a tourist and visitor attraction, while also increasing the number of international students in the university.

Tuesday’s budget saw an an extra €36.5 million provided to the higher education sector, which Minister for Public Expenditure and Reform, Paschal Donohoe described as the “first significant investment of resources” in higher education since the economic collapse.

If decreasing state funding is going to be the new normal, it should be accompanied by deregulation

However, despite this increase, Irish higher education institutions remain dramatically underfunded, and currently face a shortfall of about €1 billion. In April, a state body said that “cumulative effects” of reduced funding, reduced staffing numbers and increased teaching burdens mean that many third-level institutions are at “crisis point”.

Prendergast appeared sceptical over whether the announcement triggered a rethinking of how the state funds higher education: “I don’t think this trend is bucked by this week’s announcement.”

He spoke on the “over-regulated environment” that accompanied austerity. Noting that this had somewhat “receded”, he remained concerned that the increase in dependence on private revenue streams that has become increasingly prevalent in Trinity had not been met with greater autonomy for the university in terms of decision making. “If decreasing state funding is going to be the new normal”, he remarked, “it should be accompanied by deregulation.”

He mentioned by way of example the fact that both undergraduate fees and salaries remained under Government control, a regulation that he described as “a constraint” on the university, and its ability to budget effectively.

“We have to continue to make the case for university’s right to act independently”, he concluded.

Prendergast also praised the research and initiatives ongoing in Trinity, referencing the Trinity Biomedical Sciences Institute (TBSI) and the Irish Longitudinal Study on Ageing (TILDA). He also pointed to Trinity’s dedication to “finding students with the most aptitude for the education we offer”, placed an emphasis on access in Trinity, pointing to the success of the Trinity Access Programme and the Trinity Feasibility Study.

This is the beginning of a new direction that will see this college follow in the footsteps of US universities, where philanthropy is part of their DNA

Pointing to examples from around the world, the Provost indicated that “fees, philanthropy and commercial activities,” would be the future of the college. Later, discussing philanthropy in more depth, Prendergast detailed how he hoped to create a culture of philanthropy in Trinity. “This is the beginning of a new direction that will see this college follow in the footsteps of US universities, where philanthropy is part of their DNA”. This follows the announcement of the creation of college’s first large scale integrated funding campaign, under the guidance of the newly formed “Campaign Cabinet”.